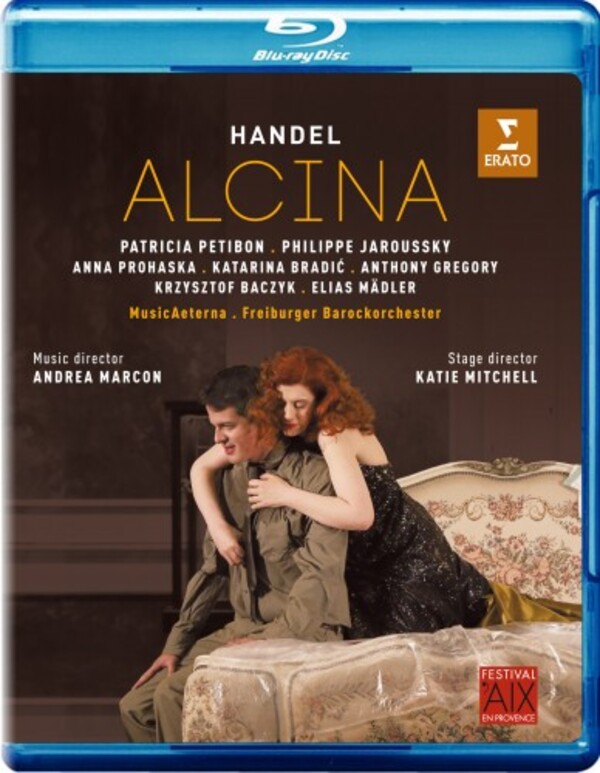 Alcina, one of Handels most popular operas, is named after a dangerously seductive sorceress  soprano Patricia Petibon in this production from the 2015 Aix-en-Provence Festival; but perhaps the central figure is the bewitched warrior Ruggiero, performed here by Philippe Jaroussky. The role, which includes the haunting, lilting aria Verdi prati, was composed for the celebrated countertenor Giovanni Carestini, who provided the focus for Jarousskys superb 2007 album of arias by Handel, Hasse, Porpora, Leo and Gluck.

Ruggiero, captive on Alcinas magic island, will be transformed into an animal or inanimate object once the enchantress tires of him, but fortunately his betrothed Bradamante (a mezzo-soprano) comes to save him, disguised as her brother, Ricciardo. Further complications ensue when Alcinas sister, Morgana, falls in love with Ricciardo.

The production of Alcina, by the British director Katie Mitchell, was welcomed by the Financial Times as meticulously executed , rich in detail, consummately polished. Like Mitchells Aix-en-Provence staging of George Benjamins hugely successful Written on Skin (first seen in 2012), it offers simultaneous action in multiple zones of the stage, with Alcinas elegant boudoir taking pride of place. As the New York Times wrote: It involves a huge sorcery machine for turning people into animals (or whatever). And Ms. Mitchell works magic of her own onstage, constantly showing the enchantresses Alcina and Morgana alternating between glamorous public personas and their real life, older, private selves  There are also bits of simulated sex, mingling genders and suggesting, among other things, inventive new ways to hit high notes.

Describing the whole show as a night of a thousand delights, Bachtrack wrote that Philippe Jaroussky cuts a mighty fine dash as the debonair knight Ruggiero  The French countertenor's yearning mezza voce delivery of Verdi prati is sublime, possibly the evening's vocal highlight, although there is strong competition from Anna Prohaska's Tornami a vagheggiar [Morganas spectacular Act 1 closing number] and from Anthony Gregory's [Oronte] physically and vocally energetic È un folle, un vile affetto. Add some bell-clear, sweetly defined contributions from Katarina Bradić [Bradamante] and Krzysztof Baczyk [Melisso] as the gallant rescuers and this Alcina is a feast for the ear. Le Monde reported that Patricia Petibon throws herself into the title role, body, voice, soul and more, toying with the limits of style, while the New York Times found that she was little short of sensational vocally  and excellent at eliciting sympathy through her acting.

The Financial Times praised the Freiburger Barockorchester for playing with flair, energy and an easy, open sound ... [Conductor] Andrea Marcon lets the phrases breathe, gives a lush continuo section room to unfold, and knows how to drive the pace forward without sounding forced. Describing Marcon as exceptional, Opera News felt that: Musically, this was a performance of the highest festival level  the continuo and instrumental solos attained a rarely heard level of ensemble with an orchestra honed to perfection.

If ever there was an opera production made for the probing, roving eye of the camera, its Katie Mitchells Alcina, originally staged in 2015 at the Aix Festival. The directors signature visual detail, coupled with her emphasis on psychological truthfulness, means that every close-up yields more intrigue, more insight into Handels troubled cast of characters. Wide shots allow our eyes to drift over Mitchells broken-down dolls house of a set. ... With the support of Andrea Marcon and the Freiburg Baroque Orchestra and a superb cast of singing actors (including a mesmerising Petibon, though her vocal tricks wont be to everyones taste, Katarina Bradics Bradamante and Philippe Jaroussky as a deliciously vapid Ruggiero), Mitchells concept becomes heartbreaking reality  a portrait of women imprisoned in a palace and a narrative of their own making.  Alexandra Coghlan
Gramophone August 2016