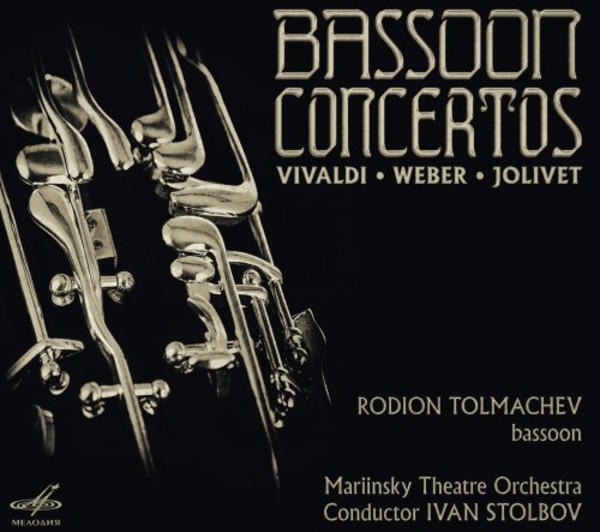 Melodiya presents recordings of concertos for bassoon and orchestra performed by young soloists of the Mariinsky Theatre Orchestra.

Rodion Tolmachev is one of the best Russian bassoonists of the new generation. A graduate of the St Petersburg Conservatory and the Hannover University of Music, he has received prizes of a number of prestigious domestic and international competitions, including the first prizes of the Rimsky-Korsakov All-Russian Competition of Woodwind Instrument Performers in St. Petersburg and the Fernand Gillet-Hugo Fox Bassoon Competition in Provo, Utah, USA, a Grand Prize of the Japan Wind and Percussion Competition in Tokyo, a bronze medal of the ARD International Quintet Competition in Munich, and a Yamaha award, and also became a laureate of the European Cultural Foundation in
Strasbourg.

Tolmachev is a soloist of the Mariinsky Theatre Orchestra since 2004, performing with it around the world and participating in solo and ensemble concert programmes. Tolmachevs solo album with bassoon works by French composers was released on the German label Dabringhaus und Grimm in 2012.

Our release features works for bassoon and orchestra written in different ages  three concertos by Antonio Vivaldi (the history of the bassoon as an independent concert instrument began with his music), a romantic, radiant with bright colours Concerto by Carl Maria von Weber, and an elegant, neoclassical Concertino for bassoon, harp, piano and strings by the 20th-century French master André Jolivet.

The chamber line-up of the celebrated orchestra of the Mariinskly Theatre is conducted by clarinetist and conductor Ivan Stolbov, a student of Alexander Titov and Vassily Sinaisky in the class of symphonic conducting of the St Petersburg Conservatory.