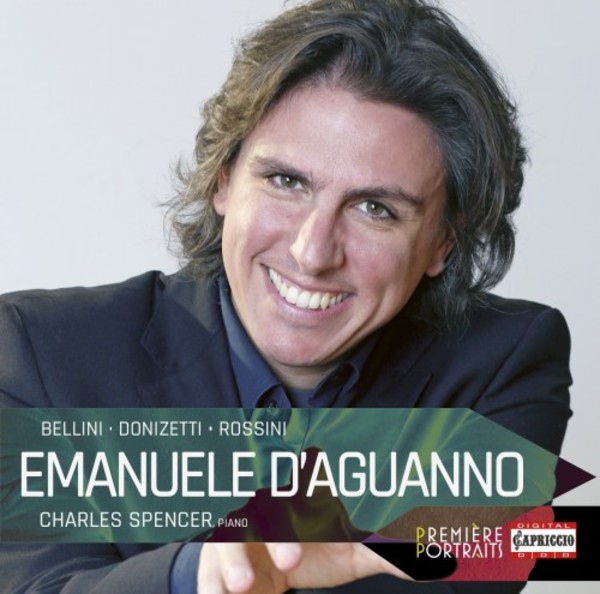 Capriccios Première Portraits CD-Edition supports young, talented artists by making their debut CDs available to a world- wide audience.
This new release presents Emanuele DAguanno, one of the most promising young tenors of his generation. He distinguished himself at the Toti dal Monte Competition in Treviso (as Paolino in Cimarosa's Il matrimonio segreto), launching an international performance career which has led to appearances at many major venues in Italy and abroad. His most signifcant recent engagements include appearances as Nemorino in L'elisir d'amore (conducted by Bruno Campanella), and Die Frau ohne Schatten (conducted by Zubin Mehta at Teatro Comunale in Florence). Engagements in other productions have included L'elisir d'amore (at Bunka Kaikan in Tokyo), Lucrezia Borgia (directed by Christoph Loy at the Bayerische Staatsoper in Munich), Salieri's Il mondo alla rovescia (at Teatro Filarmonico in Verona), as Cassio in Verdi's Otello (at the Canadian Opera in Toronto), Hasse's Piramo e Tisbe (with Europa Galante conducted by Fabio Biondi at Salzburg's Whistun Festival and in Montpellier), as Don Ottavio in Don Giovanni (at Glyndebourne), as Egeo in Mayr's Medea in Corinto (conducted by Ivor Bolton at the Bayerische Staatsoper in Munich) and in the roles of Giove and Anfinomo in Il ritorno di Ulisse in patria (conducted by Rinaldo Alessandrini) which marked his debut at Teatro alla Scala in Milan.