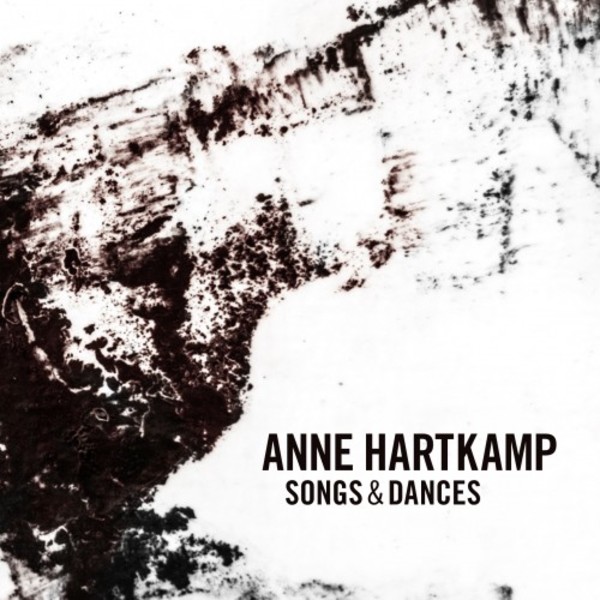 Anne Hartkamp has already presented lots of exciting projects, and extraordinary albums have been created under her name! With Gunter Hampel and Smudo, for example (Next Generation). Or in the a capella quartet "Harem 4" (both in 1997). Of course, we also have to mention "Glücklich" (2005), her foray into her German mother tongue. Under the pseudonym of Magnolia, there are two recordings with guitarist Philipp van Endert: "Humpty's Amazing Boogie Pencil" (2007) and "Wait A Second" (2012). She has worked with Michael Wollny, Nils Wogram, Lajos Dudas, Marion Brown, Axel Dörner, Perry Robinson as well as the WDR Big Band. And then there is the quintet with pianist Thomas Rückert, saxophonist Claudius Valk, bassist André Nendza and drummer Oliver Rehmann, with whom "Momentum" (2010) was recorded. However, Anne Hartkamp has never sounded so forceful and changeable or highlighted her vocal qualities so well as on her current album "Songs & Dances".

Strictly speaking, it is of course the old proven Anne Hartkamp Quintet playing the music, but now reduced to a quartet with three exceptional musicians: Rückert, Nendza and Rehmann. But the fact that the CD is entirely under her name this time documents the provisional high point of a long-running, not always smooth running, but ultimately very successful development process.  Growing up between Essen and Düsseldorf and seemingly predestined for an academic career  as a highly gifted child, she started school at a younger age than most children and later was sponsored by the German National Academic Foundation (Studienstiftung des Deutschen Volkes)  Anne Hartkamps interest in music was nevertheless stronger. She first took classical vocal studies in Vienna, which however she soon traded against studies of German philology and musicology in Bonn, an autodidactic approach to jazz, first bands, nights on the electric piano and countless jam sessions and finally jazz vocal studies under Deborah Brown, Humphrey Campbell and Erik van Lier at Amsterdamse Hogeschool voor de Kunsten. Since then, she has been considered one of the most versatile and most curious singers, composers, lyricists and arrangers.

"Songs & Dances" is her dream project. The woman, who in the opinion of BR jazz editor Roland Spiegel underlays texts with irony and makes them sparkle, combines syllable-cascades in fast-paced improvisation, can make lyrical melodies quietly glitter", now presents a bunch of unorthodox as well as charming, passionate, powerful songs and dances. The bulk was composed by Hartkamp herself and is a distillate of her eventful career, the essence of a vocalist in her very best years, who only sings what she likes and which tantalizes her tongue and heart. At the same time, her love for the flowing movement of a body to music shines through again and again. Anne Hartkamp numbered her personal dances: "As Yet (Dance Four"), "Dance Two and "Dance Three" ("Dance One" can be found on her previous album) are completely under the spell of the rhythm and harmonies. In addition, she dwells on "Scattered Minds", admires "The Moon A Sphere", savors "Sea Time", spreads hope ("Not Entirely Lost") and tries gently to delve into the secrets of a kind person ("Deep"). With a clear, intense voice and straightforward poetic views, she spreads her stories and reveals a thrilling, new interpretation of scat based strongly on the sound range of an instrument. Without sentimentality or heartache pathos, Anne Hartkamp sounds modern in every note of her presentation without leaving the traditional foundation of jazz singing for a second.

In her interpretation of the only two compositions by others on the album, the native of Cologne demonstrates most impressively that she is one of the most important jazz voices in Germany in the meantime. She and bassist André Nendza precede the labyrinth-like "Seagulls Of Kristiansund" by Mal Waldron and Jeanne Lee with the melancholic "The Concept Of North. The fan-like mesh of a splendid band and a soulful singer fascinate in John Coltrane's "After The Rain", which is catapulted to great heights again and again by the powerful wave of the mystical theme. Terrific, courageous and graceful all at once. A great success!