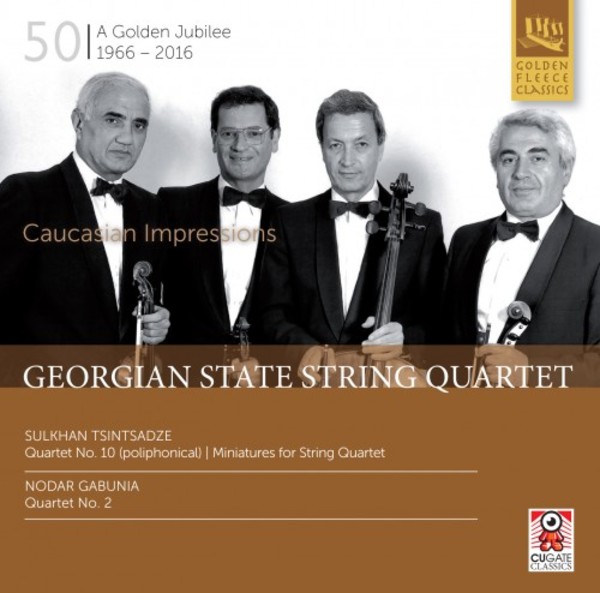 In 2016 the Georgian State String Quartet celebrates its Golden Jubilee. It is hard to believe that a chamber music group persists for half a century without a break, staying still together as in its founding days. So this album is not only representative for their art of playing but also a deep bow before the life-time achievement of four dedicated musicians, who contributed a significant part to the international concert life but never forgot their roots, which are truly Georgian.

Our album comes on the occasion of the 50 years' jubilee of the Georgian State String Quartet. It appears to be today's oldest quartet formation, whose members never changed. So they still play in the same scoring over all these years. The repertoire on this album is genuine Georgian music.

Sulkhan Tsintsadze made a major contribution to modern classical music, widely expanding its range of imagery. For this, his music has gone far beyond the confines of his country and gained renown and high acclaim abroad. He wrote 11 String Quartets and Quartet Miniatures. Although the composer himself thought of the miniatures as mere exercises in composition, one can notice in them the whole range of his individuality. Perhaps nowhere else does Tsintsadze get as close to folklore as he does in these miniatures and later in his quartets, where folklore is creatively interpreted. Brilliant examples for this are the miniatures Gandagana, Kokhem, Fly Black Starling, Chonguri and Dance Melody. The Tenth Quartet occupies a special place among Tsintsadzes quartets. In this work, the composer casts his eye over the entire path he has travelled and meets with his favourite images. The two lines that reign in all of his quartets  the genre-mundane and the lyrical-psychological  are once more united here.

Nodar Gabunia, the famous Georgian composer and pianist, student of the Moscow State Conservatory with Alexander Goldenweiser (piano) and Aram Khatchaturian (composition) wrote his Second Violin Quartet in 1982 as a three-part cycle. The main thematic material is given in the first part. There are two themes at the base of the initial section of the exposition. One of them is artless, filled with graceful dancing, and the other is refined, internally very expressive and in an improvised style. Further development is constructed on a constant increase in tension. The second part takes us into the world of psychologically profound imagery. One can hear distinctly an original individual realisation of intonations and features of the polyphony of Georgian folk song. The finale is filled with constant, uneasy movement, with transparent and sometimes harsh toccato.