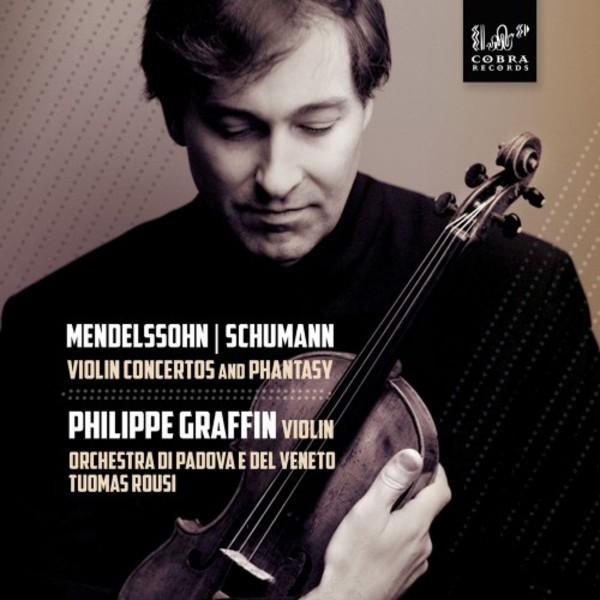 The programming of Philippe Graffin is always surprisingly remarkable; he is a master in making a logical connection between unknown or forgotten repertoire and "main" repertoire, and also a master in breaking new ground, on this CD by introducing a cadenza of his own.

For this CD he on the one side has chosen one of the most recorded, Violin Concerto in E minor by Felix Mendelssohn with the cadenza written by himself, and on the other side included the not often recorded and quite controversial Violin Concerto in D minor together with the Fantasie for Violin and Orchestra, both by Robert Schumann.

It might be surprising to hear a cadenza for Mendelssohns E minor Concerto that is different to the one we are accustomed to. In light of this, here are a few thoughts on the premise for such an intrusion. The cadenza that is commonly played is not, in fact, by Mendelssohn. Rather it is by his friend, the great violinist Ferdinand David, Konzertmeister of the Gewandhaus Orchestra in Leipzig , who premiered the Concerto and to whom the work is dedicated. Davids cadenza had the good fortune to have been included in the first edition of the Concerto. Therefore, from the start of the Concertos performance history, it became closely associated with the work. So much so that today, few realise that it is neither part of the piece, nor compulsory. The integration of a written cadenza in the development of the first movement and not an improvised one at the conclusion of it (as in the classical manner seen in concerti by Mozart, Beethoven, and later Brahms) was a pioneering idea that inspired a number of composers. This included the likes of Johan Svendsen, whose Concerto premiered in Leipzig by Ferdinand David subsequently takes the same formula, as well as famous concerti by Tchaikovsky and Sibelius. There is a detail which serves as a clue that Mendelssohn did not intend to impose this cadenza as a compulsory one: he made sure to add the words ad libitum in front it. Despite this, few of the great violinists and composers from the 19th or 20th century, following David, took the composers cue to write a cadenza of their own (with the notable exception of Wieniawski, whose cadenza for this Concerto has been lost).