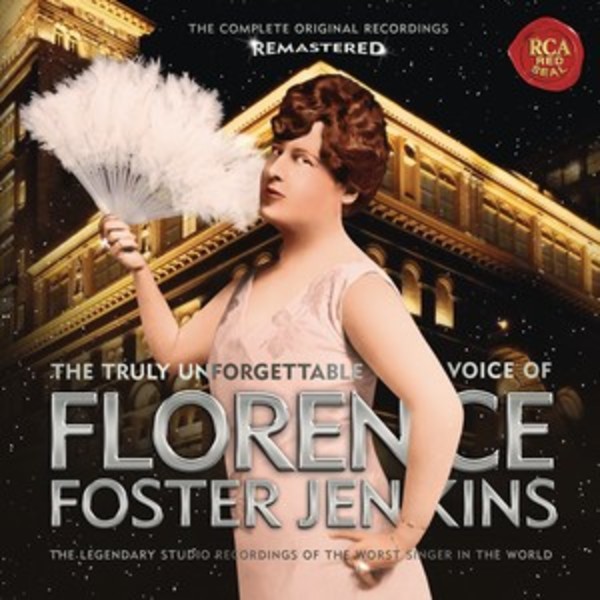 The one and only Florence Foster Jenkins - her legendary recordings, remastered!

You wont believe what you hear

Few artists ever gave such unalloyed pleasure as Florence Foster Jenkins, yet this extraordinary soprano had the wisdom not to overdo a good thing. She emphatically declined to appear in New York more often than once a year and rarely anywhere else except such favoured centres as Washington and Newport. For years her annual recital at the Ritz-Carlton was a private ceremonial for the select few  her stubbornly loyal circle of clubwomen and the adventurous cognoscenti. If the latter at times displayed an unmannerly lack of restraint, they were nonetheless faithful. Music critics covered the event in precisely the same reverse English with which they frequently, though perhaps less intentionally, leave a baffled public speculating as to what actually did happen the night before. Then the word began to get around. Tickets became harder to come by than for a World Series. Finally, on the evening of 25 October 1944, Madame Jenkins took the big step. Forsaking the brocade atmosphere of a fashionable hotel ballroom, she braved Carnegie Hall. There are those who claim that her death one month and a day later was the result of a broken heart  as unlikely as the story that her career was all a huge joke at the publics expense, a pretty expensive joke, incidentally, since Carnegie Hall was sold out weeks in advance and grossed something like $6,000. Moreover, the late Robert Bagar wrote in the New York World-Telegram: She was exceedingly happy in her work. It is a pity so few artists are. And the happiness was communicated as if by magic to her hearers

No, Madame Jenkins died full of years  76 to be exact  and, it is safe to say, with a happy heart. Neither her parents nor her husband gave any encouragement whatever to her musical ambitions, but with her divorce and the money inherited from her father, a Wilkes-Barre banker and lawyer who had served in the Pennsylvania legislature, she was free to turn her sights on New York. It is too bad she did not record her favourite encore, Clavelitos, a number she invariably had to repeat. A contemporary account describes Madame Jenkins as appearing in a Spanish shawl, with a jewelled comb and, like Carmen, a red bloom in her hair. She punctuated the rhythmic cadences of the song by tossing tiny red flowers from her pretty basket to her delighted hearers.

For some time there has been wide demand for a reissue of this Florence Foster Jenkins album, but it was felt that an attraction should be found to couple with the sopranos recordings. One day with no advance warning whatever Jenny Williams and Thomas Burns walked into RCA Victors Custom Record Department. The records they wanted to make were to be for their own use but eventually they agreed to the public issuance of the material on this disc. The English translations are their own and speak for themselves, also for the cause of opera in English. As Madame Jenkins found her way to the recording studios from the concert hall, perhaps Miss Williams and Mr. Burns, with the start they may surely expect from this disc, will one day attempt to fill, in a measure, the gap left by Madame Jenkinss departure from the musical scene.