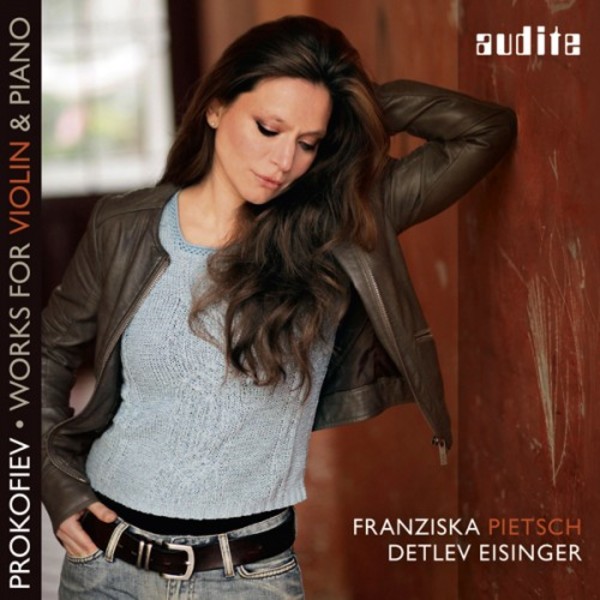 "The performers give off sparks playing these works (...).These pieces need to be played exactly in this energetic, dramatic, rhythmically accentuated and pronounced manner for then they reveal their beauty, at once austere and lyrical, most intensely." - Südwest Presse

Following the successful release of the Grieg Violin Sonatas, Franziska Pietsch and her piano partner Detlev Eisinger now present music by Sergei Prokofiev on the Audite label. His works reflect facets of her own biography to a significant degree. As an emerging talent in the GDR, Franziska Pietsch enjoyed special state support; her musical training was thus initially shaped by the Eastern European school, bringing Prokofiev's music close to her heart. His two Violin Sonatas appear as two contrasting poles within his oeuvre - her life has also moved between extremes. The state support led to early success in the GDR. However, her father's escape to the West in 1984 was followed by two years of reprisals by the regime, intensively shaping Franziska Pietsch's understanding of music: deprived of any possibility of playing concerts or taking lessons, her chosen path towards hope - against desperation, refusal, fear and despotism - led inwards. Music became the only language in which she was able to express herself freely and which gave her the necessary strength to withstand external circumstances, continuing to hope for freedom. These were the origins of the intensity and artistic depth which characterise Franziska Pietsch's playing to the present day.

The two Violin Sonatas, written largely between 1938 and 1946 after Prokofiev's return to the Soviet Union, could not be more contrary: No.1 in F minor, Prokofiev's "Appassionata", is a tragic piece, whilst No.2 in D major, originally conceived for flute and piano, is predominantly joyful and serene. Prokofiev arranged it himself, with David Oistrakh advising him. The reworked version of the Cinq mélodies, composed in 1919/20 for voice (without text) and piano accompaniment, was also produced by Prokofiev himself. These chamber works expose three intrinsic aspects of his artistry: his ability to create a seamless, emotionally intense melodic line; his often concealed tragic side; and his classicist inclination.