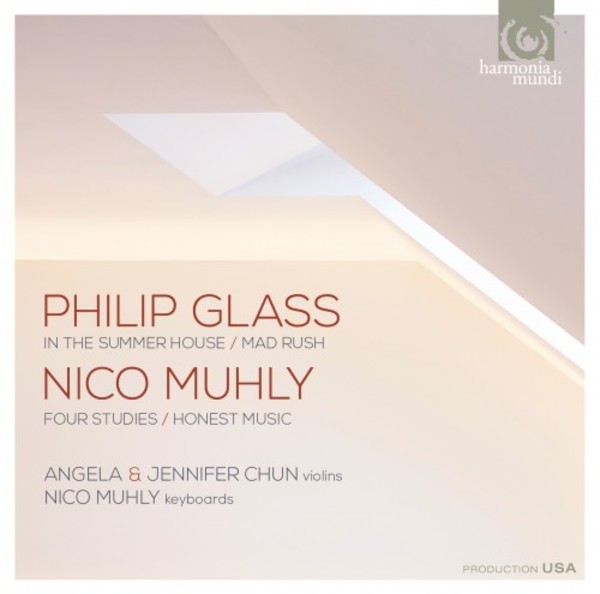 This recital of music, especially written or arranged for violinists Angela and Jennifer Chun, highlights the personal and professional connections between Philip Glass and Nico Muhly, a longtime colleague and admirer of Glasss work.

Nico Muhly first listened to Philip Glass Music in Twelve Parts in his freshman year of college, while riding the subway in New York. Within a year of that subway encounter, Muhly found himself working at Glasss studio as a copyist, editor, and sequencer for film scores. Here Glass is presented not as the author of mammoth pieces like Music in Twelve Parts, but as a miniaturist; a role shared with Muhly, who rarely composes in epic mode.

The making of this recording has been an inspiring journey for the Chun Duo: a 2009 meeting with the Dalai Lama affected the sisters deeply and led them to the music of Philip Glass, whose Mad Rush (here transcribed by Alexandra du Bois for two violins) had been composed for His Holinesss first visit to North America in 1981.

This disc of music for two violins, agilely played by Angela and Jennifer Chun, highlights their [Muhlys and Glasss] strongly individual voices. Muhlys Four Studies (2014) are transparent explorations in counterpoint (listen for the composer providing keyboard drone). Glasss Mad Rush (1979) and In the Summer (1993, transcribed by the Chuns in 2014) carry his trademark arpeggiated patterns and ever unfolding melodies, which here take on a silvery, high-violin hue.  Fiona Maddocks