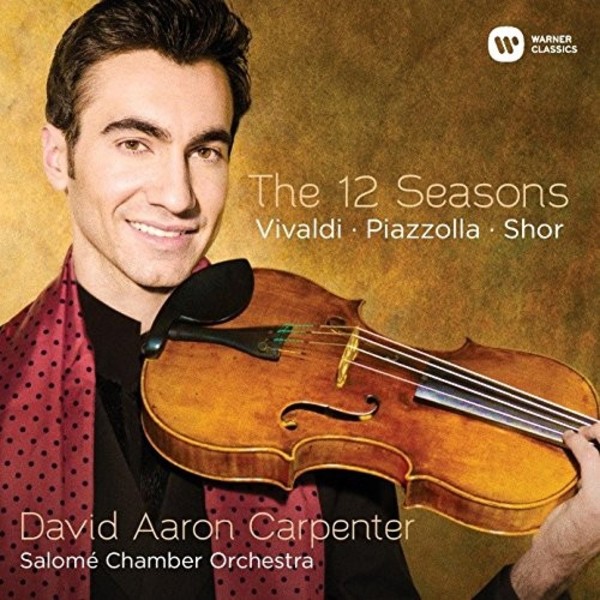 There is no shortage of recordings of Vivaldis Four Seasons, but this one really is different. First of all, it is played on the viola, not on the violin  by David Aaron Carpenter. He has been described by the German newspaper Die Welt as a new star at the forefront of violists, by the Helsinki Times as playing like a young god and by Gramophone as a player of superlative assurance and magnetic conviction". When he made his debut at Carnegie Halls Weill Recital Hall in in 2007, the New York Times praised his seductively rich sound  forceful interpretive personality and remarkable control of his instrument, and his mentors have included such distinguished musical figures as Pinchas Zukerman, Yuri Bashmet and Christoph Eschenbach.

Secondly, Vivaldis Baroque concertos are placed in a new light, since they are programmed alongside far more recent works inspired by the cycle of spring, summer, autumn and winter: Cuatro Estaciones Porteñas (Four Seasons of Buenos Aires), written between 1965 and 1970 by Argentinas King of Tango, Astor Piazzolla, and A Manhattan Four Seasons by the Ukrainian-American composer Alexey Shor, premiered in 2013. This CD represents the first time that the works by Vivaldi and Piazzola have been recorded in a version for viola.

Alexey Shor wrote his work  moody, mellow and immediately appealing  in his capacity as composer-in-residence with the Manhattan-based Salomé Chamber Orchestra, which David Aaron Carpenter founded with his violin-playing sister and brother, Lauren and Sean. The orchestra generally plays without a conductor and is therefore headless  hence its striking name, inspired by the biblical princess who demanded the decapitation of John the Baptist. It was founded by the Carpenter siblings in 2009 with the declared aim of achieving a dynamic balance of novelty, tradition and hard work. As Lauren Carpenter told the New York Times, Its great to try and change the face of what classical music concerts can be.

David, who turns 30 this year, believes strongly in taking serious music to as wide an audience as possible. Talking to The Strad magazine in 2013, he said: Id just like to see classical musicians up there with the top celebrities. Its frustrating to see the public lured by the latest pop sensation  There is more to him than his extraordinary musical talent  he started as a violinist, but felt that I couldnt get the sounds I envisioned on the violin, and in the viola I found a whole new range of sonorities: he also holds a degree in political science from Princeton, is a talented artist, a dynamic businessman and an enthusiastic fundraiser for charity.

Vivaldis Four Seasons need no introduction. They sparked the imagination of Astor Piazzolla (1921-1992), whose Cuatro Estaciones Porteñas is imbued with his characteristic maverick spirit and intoxicating dance rhythms. They are played here in an arrangement made by Leonid Desyatnikov  originally for violin with a string ensemble, but here transferred to viola.

When Alexey Shor wrote A Manhattan Four Seasons, he drew on the emotions evoked in him by the citys weather, and it so happens that the only movement in a major key is Spring, which  rather than opening the work  brings it to an optimistic conclusion.