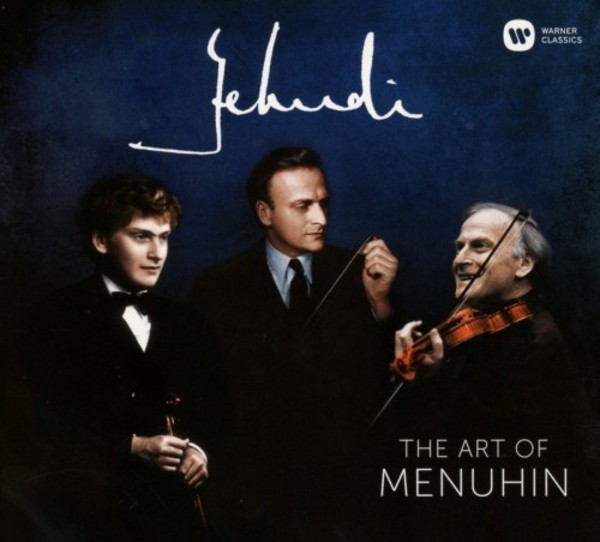 Yehudi: The Art of Menuhin

As a musician, as a man of ideals, and as a citizen of the world, Yehudi Menuhin made an extraordinary mark on his era. 22 April 2016 will mark the 100th anniversary of his birth. YEHUDI explores Yehudi Menuhins genius and artistry through his legendary recordings  the best-loved violin masterpieces, famed duets and collaborations and exclusive unpublished material - in a specially priced 3-CD compilation for the great violinists centenary year.

Now I know there is a God in heaven! exclaimed Albert Einstein when he heard Yehudi Menuhin, then just 13 years old, play a concert in Berlin in 1929. That famous anecdote encapsulates Menuhins genius as a violinist and the impact he made in the course of a career that spanned a momentous period of history. Born in New York in 1916, he died in Berlin in 1999  70 years after drawing such an amazed response from the pre-eminent scientist of the 20th century. Seventy years was also the duration of his relationship with the record company EMI. Unrivalled in the history of recording, it produced some 300 discs, now treasures of the Warner Classics catalogue. This three-CD collection, Yehudi, comprises 39 outstanding tracks, carefully chosen to display the many facets of Menuhins achievement as a violinist  in concertos, sonatas, chamber music and captivating encore pieces, in music inspired by his friendship with the sitar-player Ravi Shankar, and in partnership with the jazz violinist Stéphane Grappelli.

Menuhin was an enthusiast, a man of enormous musical and intellectual curiosity, a generous colleague and a sympathetic mentor, as well as a man of vision, ideals and determination who believed that music has the potential to change the world. In his autobiography, Unfinished Journey, published in 1977, Menuhin wrote: Speaking for myself, I am the most fortunate of human beings, having music for expression and communication  Of course it must not be  an escape. I am constantly thinking of ways and means to improve, alleviate, protect, guide and inspire in practical terms.

As a child prodigy, his education, both academic and musical, had been unconventional, but in 1963 he established the Menuhin School, not far from London. It exists to provide the environment and tuition for musically gifted children from all over the world to pursue their love of music and has produced such celebrated violinists of today as Nigel Kennedy, Tasmin Little, Alina Abrigimova and Nicola Benedetti. In 1977 he founded the International Menuhin Music Academy for young graduate string players in Gstaad, Switzerland, where in 1957 he had launched a music festival that continues to flourish in the 21st century. His legacy to the world also includes a number of charities. Menuhin said, Music, amongst all the great arts, is the language which penetrates most deeply into the human spirit, reaching people through every barrier, disability, language and circumstance. This is why it has been my dream to bring music back into the lives of those people whose lives are especially prone to stress and suffering ... so that it might comfort, heal and bring delight.

His charity Live Music Now, which operates across the United Kingdom  the country in which Menuhin made his home  takes music to people facing difficulties in their lives, such as children with special educational needs, the sick and the elderly. During World War II, Menuhin set a fine example in demonstrating the healing power of music. While the conflict raged, he gave 500 concerts for Allied troops and appeared in Antwerp, Brussels and Paris shortly after the cities were liberated. In June 1945 he performed in San Francisco for the inaugural assembly of the United Nations, and the following month, with the composer Benjamin Britten as his pianist, he played in Belsen for survivors of the Nazi concentration camps. We hoped that the experience of the music we passionately strived to share with them would speak to them of emotions they had once felt and disentangle some of the knots in their suffering souls. For many years afterwards, I received countless letters from individuals who had attended these concerts; they confirmed my conviction, which had wavered at the time, that music was, after all, an essential element of life.
- Yehuda Shapiro
CD1: Violin Concertos
JS Bach
1. Violin Concerto no.1 in A minor, BWV 1041: I. Allegro
2. Violin Concerto no.2 in E minor, BWV 1042: II. Adagio
Vivaldi
3. The Four Seasons: Concerto in G minor, RV315 Summer/Lestate: III. Presto
Viotti
4. Violin Concerto No.22 en A minor, G97: II. Adagio
Beethoven
5. Violin Concerto in D major, op.61: III. Rondo (Allegro)
Mendelssohn
6. Violin Concerto no.2 in E minor, op.64: I. Allegro molto appassionato
7. Violin Concerto in D minor: III. Allegro
Tchaikovsky
8. Violin Concerto in D, op.35: II. Canzonetta. Andante
Brahms
9. Violin Concerto in D Major, op.77: III. Allegro giocoso, ma non troppo vivace
Paganini
10. Violin Concerto no.2 in B minor, op.7: III. Rondo La campanella