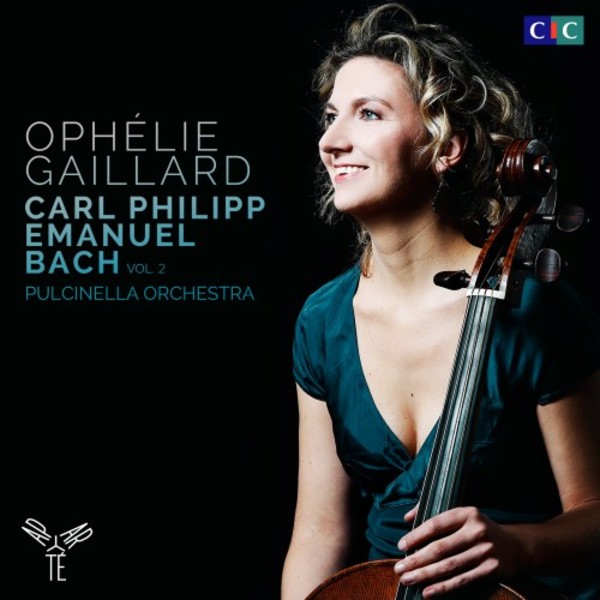 After the success of their first volume Ophélie Gaillard and Pulcinella propose a second disc devoted to Johann Sebastian Bach's most talented and surprising son, Carl Philipp Emanuel (1714-1788).

The Sinfonia in C major expresses multiple emotions, ranging from irrepressible suffering in the Adagio to joyous release and insouciance in the concluding Allegretto, tinged with near-Mozartian grace. The Cello Concerto in B flat reveals the influence of the waning Baroque era and Vivaldi in particular. The Sinfonia in E minor, nicknamed 'Fandango' and dating from his Berlin years, is commonly regarded as one of his finest symphonies. The particularly virtuosic Sonata for cello piccolo and keyboard shows to advantage the two soloists of this recording: Ophélie Gaillard and Francesco Corti, whose fieriness is further revealed in the Harpsichord Concerto in D minor.

[The Pulcinella Orchestra] are a force to be reckoned with. Led by cellist Ophelie Gaillard, the groups well-nigh impeccable ensemble and palpable enthusiasm make it an ideal vehicle for CPE Bach at his most stormy and passionate. In the concertos, the energy is lightly handled, Gaillard dancing off-the-string with impressive bow-control  I look forward to more from this excellent ensemble. - George Pratt, BBC Music Magazine, June 2014 **** / **** (AP080)

Of the various CPE Bach recordings to have been released in his 300th anniversary year, that by cellist Ophelie Gaillard and the Pulcinella Orchestra stands out. - BBC Music Magazine, December 2014