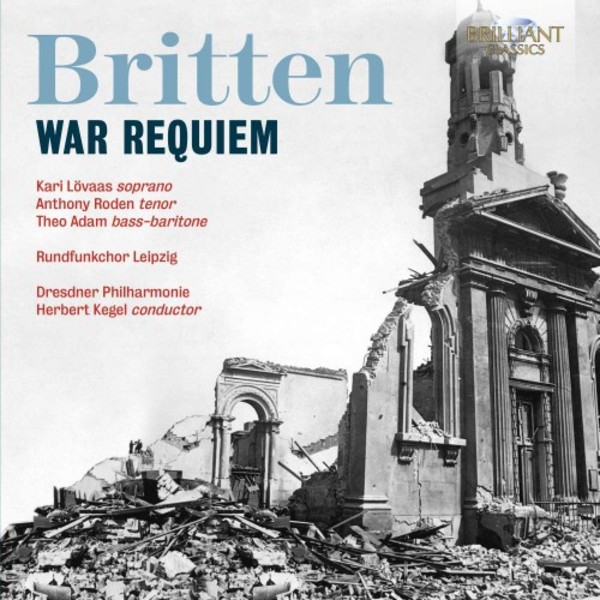 Violin Concerto 'To the memory of an angel'

Threnody for the Victims of Hiroshima

Violin Concerto 'To the memory of an angel'

Threnody for the Victims of Hiroshima

The Dresden‐born conductor Herbert Kegel felt a deep connection to the work of Benjamin Britten: in 1967 he made just the second recording of the War Requiem, a version that has not received wider circulation because it was sung in a German‐language version, which had been produced by Dietrich Fischer‐Dieskau to communicate Wilfred Owens poetry, and Brittens incandescent settings, to a local audience.

When Kegel returned to the work in 1989 he recorded it in the original English (and Latin); the set became a memorial to him, after his suicide in Dresden the following year. It is a measured and deeply considered performance, in which the consolation offered by the composers own recording on Decca is  or so it seems with hindsight  rejected for a bleaker vision of mans inhumanity to man: an impression only intensified by Kegels chosen coupling of that other, outraged, 60s lament for pacifism, Pendereckis Threnody for the Victims of Hiroshima. An alert, clear‐sighted and well‐balanced interpretation, noted Rob Cowan in Gramophone in April 2002, and so it is. The experience of its context, however, lends it a frisson not available to any other recording: made on the other side of the Iron Curtain that had been built by decades of conflict between Germany and the rest of Europe, in the dying days of the Cold War.

The Berg Concerto here is likewise Kegels second recording of a personal elegy (the first, with the Hungarian violinist György Garay, has never appeared on CD). The soloist here is Manfred Scherzer, another musical son of Dresden (1933‐2013).