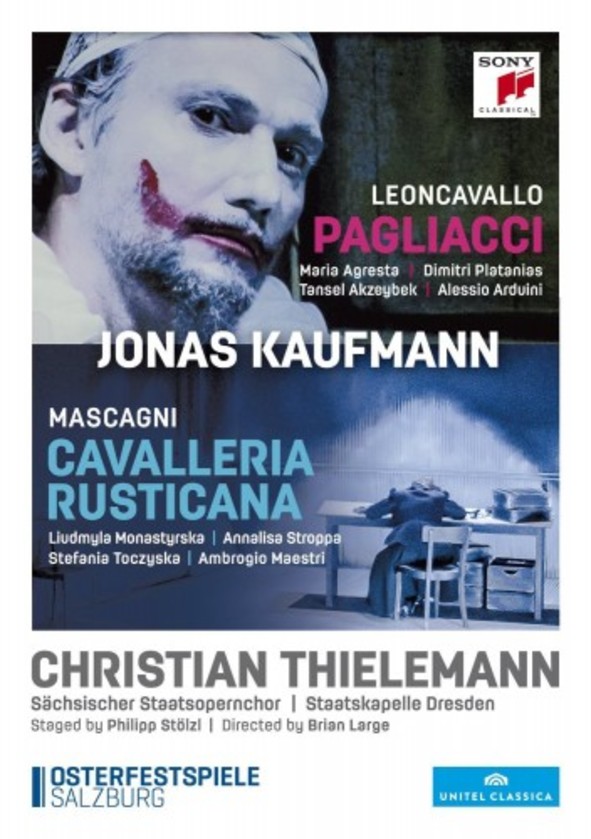 As comparably short operas Cavalleria rusticana and Pagliacci are often billed together, but seldom is the lead tenor making his double role debut as Turiddu and Canio on the same evening. At the 2015 Salzburg Easter Festival Jonas Kaufmann did just that - to rapturous praise. Universally hailed as a coup for Kaufmann, the plaudits were also showered on Philipp Stölzl for his innovative compartmentalized staging which included live video projections while referencing the era of black-and-white movies.

Opera as Great Romantic Cinema, wrote the Salzburger Nachrichten about the two one-act operas Cavalleria rusticana and Pagliacci, which proved real crowd-pullers and ensured record attendances at the Easter Festival. No wonder, for JONAS KAUFMANN, for whom it was in both cases his role debut, was on stellar form twice (Daily Telegraph). Kaufmann sings both parts so lyrically, with such italianità, mellow with impeccable highs, as to be a pure delight. (Kurier)

Equally impressive are Thielemann  the uber-conductor (Telegraph)  and the Dresdeners, who take time for sensitive, melodious soul portraits, while delivering consummate drama at just the right moment. What we hear from the pit is sensational in its nuances. (Kurier)

The scene is set by film and opera director Philipp Stölzl, contributing to the performances huge fascination: Stölzl divides the stage into several levels, staging crowd scenes below, private feelings above  the latter projected with filmic close-ups  doubling and trebling the action.

Productions like this, insists the Kurier, simply must be described as worldclass.

This new Cav and Pag is doubly treasurable. Not only  as the labels blurb loudly but rightly proclaims  does it capture Jonas Kaufmann singing both Turiddu and Canio for the first time in this 2015 Salzburg Easter Festival production, but the tenor also sings them fabulously well. Once we get beyond Tiriddus song to Lola, delivered instrospectively but  in the context  effectively on stage, theres none of the self-regarding over-interpretation that for me can mar Kaufmanns performances in the theatre (although many prize his mezza voce more highly than I do). Instead we have plenty of the thrilling, untrammelled and ringing sound that the tenor is capable of at his best, with no loss of sensitivity in terms of musicianship or acting. Happily, Kaufmanns outstanding central performances are well matched, both musically and scenically. Philipp Stölzls production captures something of the expressionist feel and period of early German cinema  and in so doing also underlines the parallels between that stylised aesthetic and that of commedia dellarte, exploited in Leoncavallos work. ... this new account, built around two of Kaufmanns finest performances, is compelling and fascinating. Highly recommended, especially at Sony Classicals low price.  Hugo Shirley
88875193409
88875193409
Gramophone May 2016