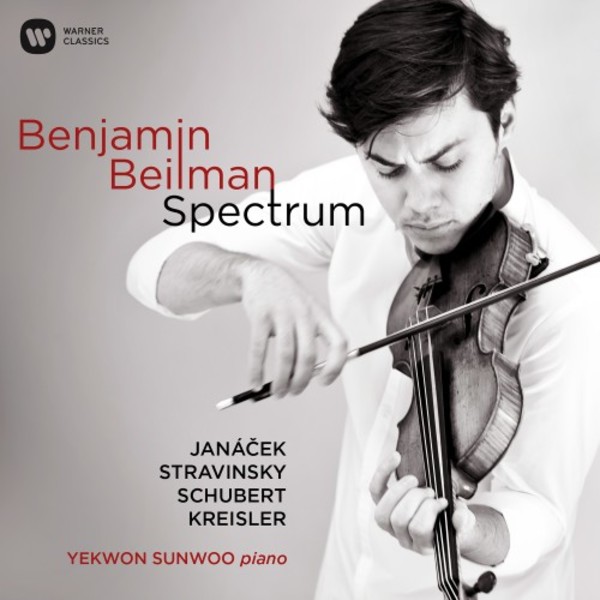 For his debut as an exclusive Warner Classics artist, the 26-year-old American violinist Benjamin Beilman has chosen four contrasting, yet complementary works that span the Viennese and Slavic repertoires and the 19th and 20th centuries. Appropriately, the album is entitled Spectrum.

Joining him on the album is his regular duo partner, the pianist Yekwon Sunwoo  a fellow alumnus of Philadelphias prestigious Curtis Institute of Music. Yekwon and I have performed these pieces together for years, explains Beilman. As we looked to choose the repertoire for our debut album, we realised that the four works featured on Spectrum  while seemingly disparate at first glance  share many common bonds. The natural lyricism and tenderness of the Schubert  [Sonata in A major D574 Grand Duo] highlights the moments of intimacy in the Janáček [Sonata for violin & piano], which so often expresses pure violence and terror. Stravinsky's dance rhythms and insistent pulse [Divertimento from Le Baiser de la fée] are echoed in the waltz section of the Kreisler [Viennese Rhapsodic Fantasietta].

Benjamin Beilman is more than ready to explore the many colours and expressive possibilities that the music on Spectrum opens to him  and to evoke them with the finest technical nuances. He first attracted wide attention by winning the 2010 Montréal International Musical Competition with an epic among violin concertos, the Sibelius. Since then, the reviews that he has amassed from the critics of the New York Times provide an insight into his distinctive and multi-faceted artistic personality: handsome technique, burnished sound  dark chocolate sound and lyricism  a passionate performer with a deep, rich tone   bold sound   muscular with a glint of violence. The newspaper summed up his partnership with Yekwon Sunwoo in a description of their interpretation of Brahmss Violin Sonata no.3: a passionate and expressive performance, with the turbulent outbursts balanced with introspective poise by this youthful, but musically mature, duo. Around the time of his Montréal victory, meanwhile, the Philadelphia Inquirer described Beilman as poised and monstrously talented and, in 2012 praised his compelling performance of Bruchs well-loved Violin Concerto no.1, emphasising that the brain behind the sound burst with ideas.

Beilman started learning the violin at the age of five and went on to study as a teenager with the distinguished teachers Roland and Almita Vamos in Chicago. At the Curtis Institute his main professor was Ida Kavafian, but he has also studied with Pamela Frank. More recently, he took lessons at the Kronberg Academy in Germany with Christian Tetzlaff.

As a soloist, he has performed in Europe with such orchestras as the London Philharmonic, Frankfurt Radio Symphony, Tonhalle Zurich, Basel Symphony and London Contemporary Orchestra, in Asia with the Malaysian Philharmonic Orchestra, and in North America with the Philadelphia Orchestra, San Francisco Symphony, Orchestre Métropolitain de Montréal, Indianapolis Symphony, Detroit Symphony, Dallas Symphony and Los Angeles Chamber Orchestra. He is also an avid chamber musician, appearing regularly with the Chamber Music Society of Lincoln Center in New York and on tour, and at such festivals as Music@Menlo, Marlboro, Santa Fe, Seattle Chamber Music, Mecklenburg-Vorpommern and Verbier. His appearances as a recitalist include Carnegie Halls Weill Recital Hall, festivals in Tokyo and Beijing, and, in Europe, Wigmore Hall in London, the Berlin Philarmonie and the Zurich Tonhalle.