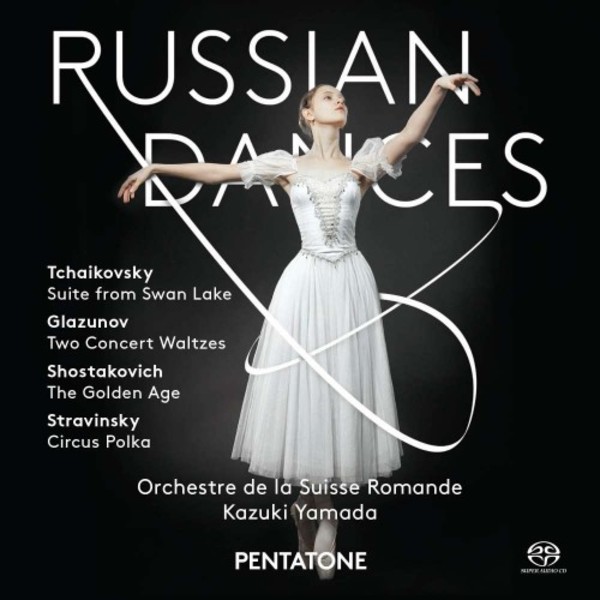 An SACD album to get carried away with, from the first to the last second, with some of the most enchanting and characteristic dances, composed by some of the greatest Russian composers of the 19th and 20th centuries. Combined on the album are Peter Ilyich Tchaikovskys Swan Lake Suite, op.20a, Alexander Glazunovs Concert Waltzes nos. 1 and 2, Dmitri Shostakovichs The Golden Age Ballet Suite, op.22 and Igor Stravinskys Circus Polka, composed for a young elephant. Recorded at Victoria Hall in Geneva, Switzerland in July 2015, this album is another result of the very fruitful relationship developed between the Orchestre de la Suisse Romande and PENTATONE over the last decade. At this occasion the OSR is conducted by Japanese conductor Kazuki Yamada, who was appointed Principal Guest Conductor of the orchestra in 2012 after a very successful European debut with them in 2010. Kazuki Yamada equally holds the position of Principal Conductor of the Japan Philharmonic Orchestra and Principal Conductor and Artistic Director Designate of the Orchestre Philharmonique de Monte Carlo and he regularly appears as guest conductor with many other leading orchestras, receiving critical acclaim.

This is the third PENTATONE album of a series of three which feature ballet, theatre, and dance music performed by the Orchestre de la Suisse Romande lead by Kazuki Yamada. The first one comprises music by French composers, amongst them the very popular L'Arlésienne suites by George Bizet. The second features the music of the German-speaking countries inspired by la fin de siècle, in the interwar period.

[Yamada] draws playing of felicitous polish, captivating flexibility and winning application throughout what is a most imaginative, distinctly moreish programme; indeed, on first acquaintance, I listened to the whole disc twice for sheer pleasure! - Gramophone Magazine on German Ballet Music (PTC5186518)

This hugely enjoyable and beautifully recorded programme could easily have been subtitled a journey from fantasy to irony. ... Kazuki Yamada and the Orchestre de la Suisse Romande revel in the very different qualities of each work.  Erik Levi
BBC Music Magazine June 2016