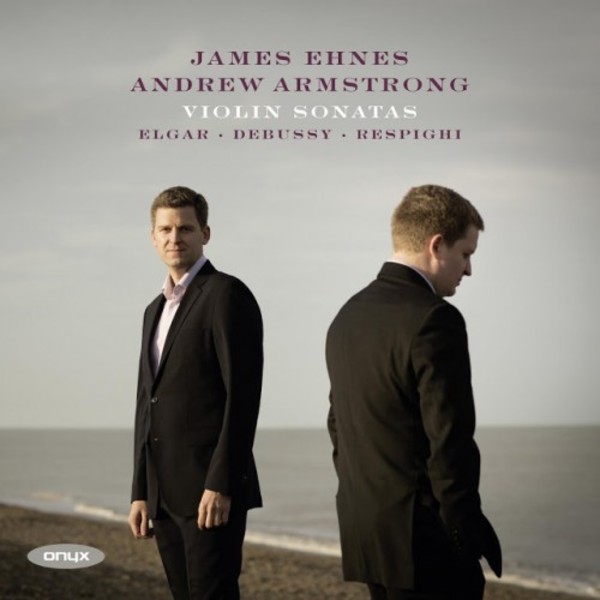 After a rapturous critical reception for their Franck & Strauss Violin Sonatas, James Ehnes and Andrew Armstrong turn their attention to three violin sonatas all composed around the years of World War I. The Sibelius 'Berceuse' also dates from the war years when Finland was isolated from the rest of Europe. Sibelius was short of money and busy writing the 6th and 7th Symphonies, and planning his 8th: the six short pieces of Op.79 were attractive to publishers who were wary of large scale works with little chance of commercial return during the hostilities.

Debussy would die in 1918 and had, like Elgar, composed very little during the conflict. "I want to work," he wrote to his publisher Durand, "not so much for myself, as to provide a proof, however small, that thirty million Boches cant destroy French thought". Elgar told a friend "I cannot do any real work with the awful shadow hanging over us". Suffering from ill health, Elgar wrote the Sonata in Sussex where a copse of gnarled lightning-ravaged trees, near his house on the South Downs, inspired him to embark on three late great chamber works. Respighis Sonata inhabits a heroic, late-romantic, almost Brahmsian world, seemingly unscathed by the devastation of the War to end all wars.

Debussy, Elgar and Respighi dont usually come up in the same sentence, but all wrote their violin sonatas during or immediately following the first world war. James Ehnes and Andrew Armstrong make of them a satisfying recital disc that showcases Ehness warm tone and purposeful phrasing. These are serious pieces, and while some performers have brought a lighter touch to passages in both the Debussy and Elgar, Ehnes and Armstrong make their heavyweight interpretations work. In the first movement of the Elgar they contrast the driving, almost mechanical piano supporting the opening with the romantic second theme; at the start of the third we hear the sun slowly come out, and the movement builds from this in a way that is superbly paced. Armstrong is more to the fore in the Respighi, a splurge of hyper-Romanticism that works thanks to the way both players can sustain a long line. After this, Sibeliuss wistful little wartime Berceuse is the perfect antidote.  Erica Jeal
The Guardian 18 March 2016

The Debussy Sonata [is] Charmingly performed, witty and poetic. ... The [Elgar] Sonata is taken at a relaxed pace allowing the music to breathe and express its autumnal beauty. A notable performance to be compared with the very best in a competitive field. ... This new recording [of the Respighi Sonata] must now take its place as the best reading of this work now available. ... A well-conceived programme in first class performances.  Ian Lace (Recording of the Month)
MusicWeb International May 2016

This is a radiantly engineered album of music composed around the time of the Great War, played with beguiling eloquence by James Ehnes and regular playing partner Andrew Armstrong. ... Ehnes and Armstrong capture the [Debussy] Sonatas meticulously fashioned amorphousness to perfection, free-floating one minute then reining us back in the next.  Julian Haylock (Chamber Choice)
BBC Music Magazine June 2016