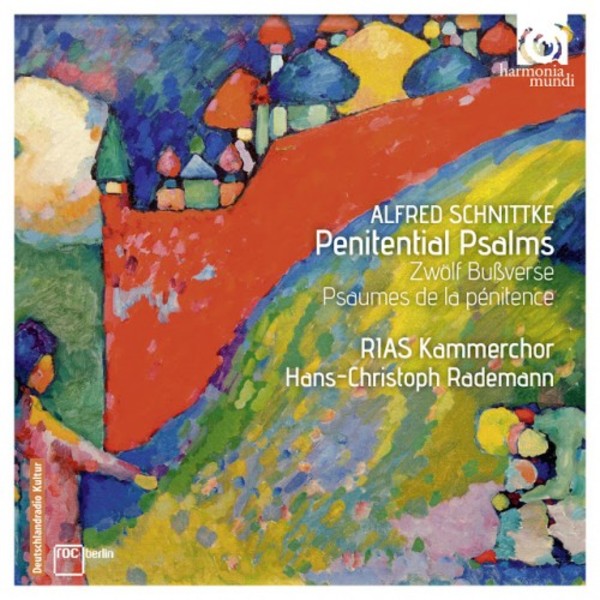 The Penitential Psalms for mixed choir a cappella were first performed on Boxing Day 1988, in the concert hall of Moscow University, by the USSR State Chamber Choir under the direction of Valery Polyansky. They deal with the motif of original sin and refer to the story of the treacherous murder of Vladimirs sons Boris and Gleb, later canonised and revered as martyrs, which their older half-brother Svyatopolk perpetrated in 1015 in the course of bloody conflicts over the succession. This masterpiece of exceptional density and rigour, at once contemporary and timeless, is performed here from the composers autograph manuscript, which includes significant divergences from the published edition.

In the autumn of 1983, at the Moscow premiere of the Faust Cantata, Polyansky had asked Schnittke to write a new a cappella piece for his ensemble, a request that was initially declined. It was only after repeated urging that Schnittke relented, and the very next day after this renewed plea, he thrust into the surprised conductors hand the manuscript of three choral movements setting prayers used in Russian Orthodox devotions  not without berating Polyansky, tongue-in-cheek, as a dreadful fellow for his tenacity. In comparison with the Penitential Psalms, the Three Sacred Hymns are more strongly rooted in the Romantic tradition of Russian sacred music, such as Rachmaninov's All-Night Vigil.

The music of Alfred Schnittke had a close relationship with the Orthodox traditions of Russia, and this sequence of 12 penitential psalms was composed for the millennium of the Christianisation of the country. The texts are not from the biblical psalms but were written by monks of the 16th century. Their self-abasing guilt and wretchedness are utterly depressing, yet Schnittkes spiritual imagination lifts them on to another plane. Though fiercely complex and demanding, they have a piercing intensity, and the wordless final psalm with its aspiring harmonies is incredibly affecting. The sacred hymns that follow are much simpler, but equally well performed by the superb RIAS Chamber Choir.  Nicholas Kenyon
The Observer 20 March 2016