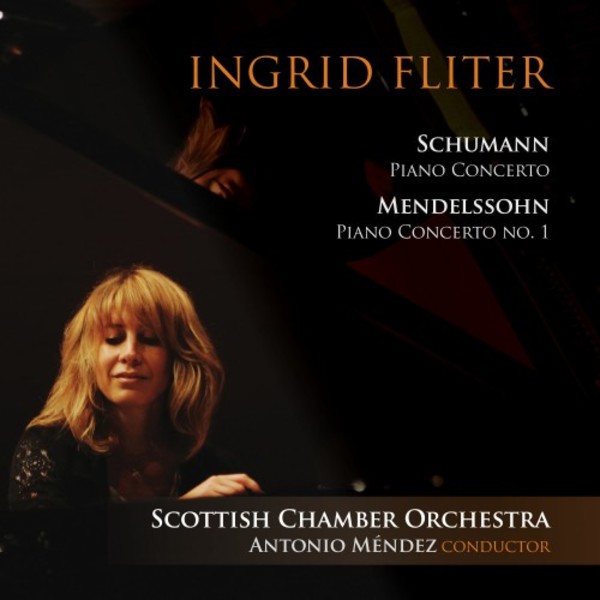 Piano Concerto in A minor, op.54

Piano Concerto in A minor, op.54

Ingrid Fliter is set to thrill her fans with a new recording of piano concertos; eagerly awaited since her acclaimed recording of Chopin 1 & 2, which saw Fliter nominated for a Gramophone Award.

Fliter performs repertoire that is very close to her heart: concertos by two nineteenth century heavyweights, Schumann and Mendelssohn. Fliter brings the lyrical romanticism of Schumanns iconic Piano Concerto to life whilst perfectly navigating the shifting colours and technical demands of this brilliant showpiece. The sparkling passagework and charming melodies which characterise Mendelssohns innovative G minor concerto demonstrate Fliters innate skill and pianistic instinct. Following Fliters live performance of the Mendelssohn concerto one critic wrote: In the beautiful second movement, time stood still. With both composers giving equal focus to soloist and orchestra, the musicality of the SCOs award-winning musicians shines through as they partner Fliter perfectly. This also marks the recording debut of Antonio Méndez, who is fast becoming one of the most exciting conductors of his generation following engagements with a host of international orchestras.

[Schumann:] Fliter is also in her element. Hers is a reading of firm, exhilarating impulse, at the same time taking its cue from the lyrical heart of the music and glowing with the limpid touch, golden timbre and subtle nuances that are hallmarks of her playing. [Mendelssohn:]  Fliter has the measure of the work. The first movement has real fire; the finale bears a cheerful smile and sizzles with vitality; and the central, song-without-words, Andante, is played with heart-stopping tenderness and warmth. With The Fair Melusina overture dynamically performed by the SCO, this is a compelling recording.  Geoffrey Norris
The Daily Telegraph 7 May 2016

The Mendelssohn concerto suits Fliter particularly well, and shes alive to the impetuosity of the outer movements, as well as to the works more poetic elements. Fliters command of the drama is second to none. She seizes the music by the scruff of the neck.  Harriet Smith
Gramophone May 2016

there's still room for something fresh to be said with this evergreen music  in both the Mendelssohn and Schumann, Fliter plays with tautness and energy, fitting hand-in-glove with the smaller chamber-orchestra forces of the SCO and drier recorded sound. Heartfelt and intelligent, this is life-enhancing music, and as a bonus there's The Fair Melusina Overture.  Rebecca Franks
BBC Music Magazine May 2016

The wait was worth it. She brilliantly tackles Schumann's shifting colours and technical demands head on, not for a moment compromising the work's lyricism.  Drive Album of the Week
Classic FM 18 April 2016