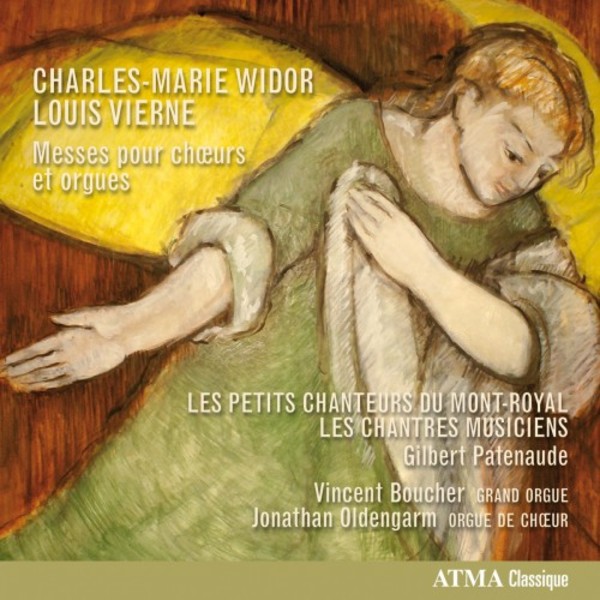 Vincent Boucher, titular organist of the great organs at Saint Josephs Oratory of Montreal, is the soloist on this recording featuring two organs and two choirs. He performs the masses and sacred motets of Charles-Marie Widor and Louis Vierne with the Petits chanteurs du Mont-Royal and the Chantres musiciens. This new ATMA Classique recording was made in the spectacular setting of the basilica of Saint Josephs Oratory.

Widors Messe, op.36, been described as containing the power of Bach and of Handel, combined with the penetrating grace of Mendelssohn, all animated by a Catholic feeling. The mass was composed in 1878 for the Saint-Sulpice church, and calls for a large number of singers formed into two choirs.

Louis Vierne began writing his Messe pour deux orgues et chur, op.16, in 1899, when he was Widors substitute at Saint-Sulpice. The album also contains other sacred works: Tantum ergo and Ave Maria, both by Vierne, and Widors Psalm 83 (Quam dilecta tabernacula tua), his Tantum ergo, and his motet Sacerdos et Pontifex (Surrexit a mortuis) for mixed choir and two organs.