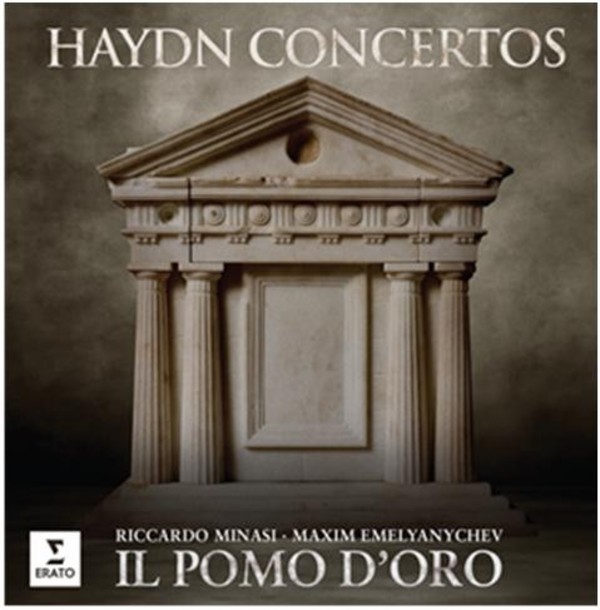 Conducted by Minasi, Il Pomo d'Oro appears on two recent Erato releases: Handels sparkling opera Partenope and Giovincello, the collection of Baroque and Classical cello concertos with Edgar Moreau as soloist. Though Minasi was born in Rome, Il Pomo dOro has a particularly strong association with Venice, so it was appropriate that conductor and orchestra accompanied countertenor Max-Emmanuel Cencic in his recital Venezia  Opera arias of the Serenissima, released in early 2013. (Minasi also conducted Joyce DiDonatos album Stella de Napoli, though there he was in charge of the Orchestre de lOpéra de Lyon.)

Haydns Cello Concerto in C major featured on Giovincello alongside works by other composers, but here the album is entirely devoted to works by the groundbreaking, prolific, long-lived and influential Austrian composer. He wrote numerous concertos for solo instruments and combinations of instruments; perhaps most famous of all is his trumpet concerto in E flat, but this collection focuses on concertos he wrote for violin (played here by Minasi), keyboard (Emelyanychev, here playing harpischord), and horn, (the Austrian horn-player Johannes Hinterholzer). The concertos are complemented by his Symphony No 83 (known as The Hen, because of the clucking figures on the strings in its second movement) and his Keyboard Fantasia Hob.XVII:4.

When Minasi and Il Pomo d'Oro appeared at Londons Wigmore Hall in 2014, the Guardian wrote: Il Pomo dOro is a wonderful ensemble, and Minasi an outstanding musician  Minasi gave us concertos , dancing as he played, communicating his joy in music-making to us and to his ensemble, and bringing the house down with his virtuosity.

In France, Emmanuelle Giuliani of La Croix had to following to say about Maxim Emelyanychev: He can do anything with his ten fingers  Rapid, rippling figurations and thrumming chords; from a barely-sketched caress to undulating, legato lines. Beyond his peerless technique one is struck by the lively, passionate spirit of a man of the theatre.

... in performances of commitment and flair such as these, nothing in any of these five concertos can be discounted as mechanical routine, even alongside the 83rd Symphony, La poule, given a splendidly colourful reading at the start of disc two. ... The dazzlingly fresh, vital way [Minasi and Emelyanychev] join forces in the concluding account of Haydns single surviving Double Concerto seems to sum up what the venture is all about.  Max Loppert
BBC Music Magazine July 2016