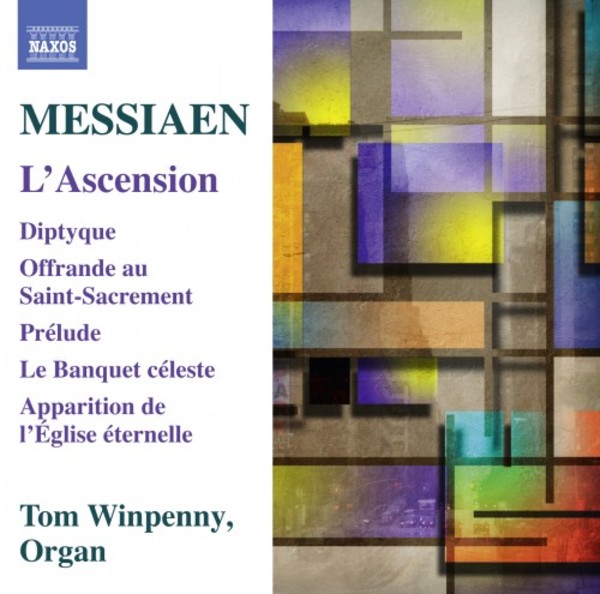 Olivier Messiaens early organ works helped establish him as a towering figure of 20th-century music. LAscension is the most significant of these, with its solemn majesty, dazzling colours and near-static serenity and timelessness. These qualities were already present in Le Banquet céleste, Messiaens first published organ work, and in Apparition de lÉglise éternelle  a powerful representation of the eternal church emerging and fading from view. The two works discovered posthumously in 1997, Prélude and Offrande au Saint-Sacrement, show the influence of Dupré and Tournemire. Tom Winpennys acclaimed recording of Messiaens La Nativité du Seigneur can be heard on Naxos 8573332.

One of the more amusing stories to emerge from the recent tributes to Pierre Boulez was this comment, made by Boulez to Gerard McBurney about his former teacher, Olivier Messiaen: Ah, Messiaen, he is for me a big problem  [dramatic pause] The religion  [another pause, shrugged shoulders, and louder] The birds  [louder still, hands raised and in tones of pantomimic horror] And  my God  the ORGAN!

Organ music may not be to everyones taste (it clearly wasn't to Boulezs!), but if there are two composers whose music transcends the medium even while being inextricably wedded to it, they are JS Bach and Messiaen. Or in other words, you don't need to be an organ music buff to appreciate the greatness of their works for the instrument. This becomes abundantly clear when listening to Tom Winpennys staggeringly fine new Messiaen disc on Naxos. Following on from his highly successful 2014 recording of La Nativité du Seigneur (Naxos 8573332), Winpenny now gives us a collection of Messiaens early organ works. While his first disc used his home organ at St Albans, this new one uses the magnificent Rieger instrument (1992) at St Giles Cathedral, Edinburgh, and what a glorious sound it makes. Rieger Orgelbau is famed for the adaptability of its organs to a range of styles, and its Edinburgh opus, with huge tonal resources, is a superbly pliant and imposing instrument.

On a first listen-through, what strikes one most is the sheer combination of power and brilliance with absolute clarity in the louder pieces: the completely re-composed third movement (Transports de joie) of the organ version of LAscension (1933-34), a thrilling toccata-like performance, and above all the granitic tread of Apparition de lÉglise éternelle (1932), a vision of the eternal Church emerging and then fading from view. The immediacy of the recording (much closer, for instance, than the Olivier Latry performances on DG) is utterly gripping, while Winpenny clearly understands the Messiaen idiom and is in full command both technically and stylistically: this may not be a French instrument, but the possibilities it offers are used in total accord with the demands of the music.

Visceral as these loud movements are (be prepared for reaction from the neighbours!), what becomes increasingly apparent on re-listening is how successful the slower, carefully-shaded, more mystical pieces are. The other three movements of LAscension (all originally for orchestra) have seldom sounded as wholly idiomatic as they do here (the closing Prière du Christ is completely captivating), and the genius of the work as a whole is never in doubt. Spellbinding, too, is the voix-humaine colouring of Offrande au Saint-Sacrement, with its sweet tremolo and celestial upper lines.

In the popular Banquet céleste (1928: Messiaens first published organ work), the famous pedal line (marked short staccato, like waterdrops) in the third exposition of the theme is wonderfully telling and perfectly voiced. Perhaps the biggest surprise, though, is how convincing a case Winpenny makes for the supposedly lesser works: Diptyque (1928-30?) with its two contrasted panels, the first busy, earthy and very Parisian, the second static and serene; and the lovely Prélude from the same period, so redolent of Messiaens teacher Marcel Dupré. With the Rieger instrument at his disposal, Winpenny shapes both works with the greatest sympathy.

Listening to this disc, one wonders anew at the individuality of Messiaens invention and imagination, which blossomed so fully within just months of first setting eyes on an organ. The quality of performance and fullness of sound is such that even Boulez himself might have been won over. Even if you dont normally do organ music, give this a try: its completely absorbing.