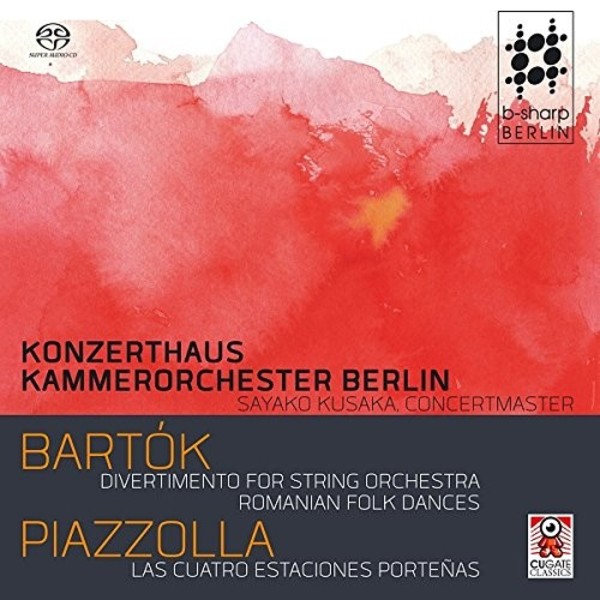 Bartoks Divertimento for String Orchestra was written in two weeks in Switzerland in the summer of 1939  just before the outbreak of World War II  as a commissioned work for the Basel Chamber Orchestra and its legendary conductor Paul Sacher, who conducted the premiere on 11 June 1940. The title, which promises pleasant light music, probably misleads the listener because the symphony-like three movement work is marked  especially in the slow movement, the center of the work  by a deep earnestness, as if the composer was aware of the global disaster to come and wanted to avert it through his music. In the virtuoso string writing various solos are repeatedly interwoven which at time give this string symphony the character of a concerto grosso.

The piano version of the Romanian Folk Dances originated in 1915. Two years later, Bartok created an orchestral version of these dances which became more popular then the original piano version. The cycle consists of six original Romanian folk tunes which last about six minutes, every one of them used to their utmost in terms of contrast and tension.

The music of Astor Piazzolla is inseperably associated with the most famous Argentine dance, the tango. The musician started his career as a bandoneon player in various ensembles in Buenos Aires. But it was in Paris, where he began his studies with Nadia Boulanger, that Piazzolla developed his personal and unmistakable style. Back in Argentine he began to find his expression in Tango Nuevo, which in terms of form and compositional technique combines elements of the classical European music tradition, Argentinian folklore and hints of jazz.

Las Cuatro Estaciones Porteñas, loosely translated as The Four Seasons of Buenos Aires, were composed for Piazzollas own quintet and later on arranged by the great cellist in tango history José Bragato. In his arrangement he conveys the characteristic elements of Tango Nuevo such as harmonic sequencing, complex counterpoint polyphony plus unexpected time and tempo changes in the style of Vivaldis famous Le quattro stagioni in the form of a virtuoso Baroque concerto. But the title also refers to the city of Buenos Aires whose inhabitants call themselves Porteños. Thus, the four pieces are to be understood as musical snapshots capturing the Argentine capital at different times of the year.