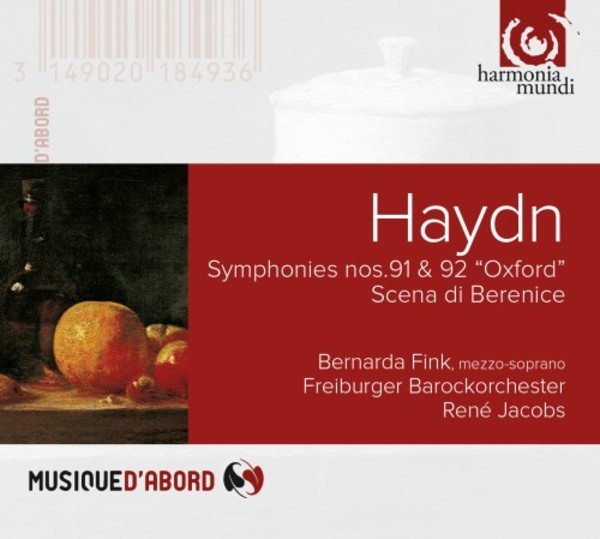 the real delight of this disc is its 12-minute centrepiece, the concert aria 'Berenice, che fai?', which is performed by mezzo Bernarda Fink with all the passion and poignancy that apparently was missing (according to Haydn's diary) from Brigida Banti's account at its London premiere in 1795. - Anthony Holden, The Observer, 17 April 2005

"Some wonderful playing here from the superlative Freiburg ensemble under René Jacobs. Their recordings are always a joy and this is no exception... Jacobs is an outstanding Haydn interpreter." - Michael Kennedy, The Sunday Telegraph, 17 April 2005

"No one could accuse Bernarda Fink of singing scantily: hers is an admirably rich and full voice, and she performs the piece with intense passion... the whirlwind presto finale of the Oxford is irresistible, and the Freiburg Baroque orchestra dispatches it brilliantly." - Misha Donat, BBC Music Magazine, June 2005

the virtuoso string playing of the FBO is simply astounding... This is a performance [Scena di Berenice] that is both superbly dramatic and infinitely touching with Jacobs drawing the most sympathetic accompaniment from his fine orchestra. - Frank Carroll, The Sunday Herald

Symphonies Nos 91 and 92 positively explode with vitality Wow. If you dont have any Haydn on your shelves, you couldnt start with a better choice. - Natalie Wheen, Classic FM Magazine, September 2005