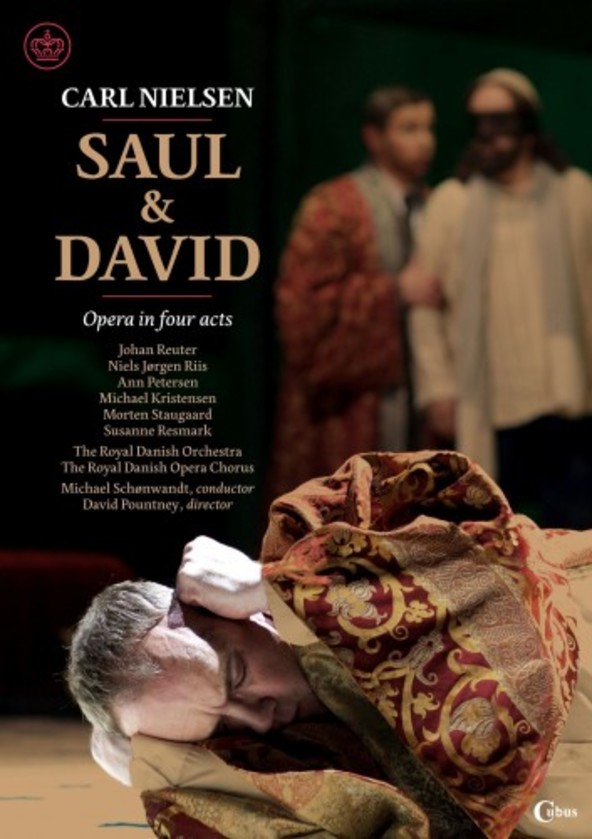 This DVD presents a spectacular new production of Carl Nielsen's dramatic debut opera, Saul & David from 1901 - a production marking the Royal Danish Operas celebration of the composer's 150th anniversary in 2015.

King Saul, bitterly jealous of young David, who won the favour of the people by defeating the giant Goliath, is staged in a highly original fashion by acclaimed English director and Nielsen enthusiast David Pountney, who updates the Biblical story to our own time, lending it psychological and political undertones.

The performance is conducted by Nielsen expert Michael Schønwandt and presents an array of Denmark's leading singers with Johan Reuter in the demanding role of King Saul, Niels-Jørgen Riis as David and Ann Petersen as his beloved Mikal.

Johan Reuter is overwhelmingly good in what may be the best role of his life. - Opernwelt

The renowned Nielsen interpreter Michael Schønwandt conducted with great love for the music that never smothered it: drawing warm and polished playing from the orchestra, he gave the impression of really channeling and shaping the music as it pulsed through him - Opera Magazine

Pountney concentrates on the dangers of power which obviously fascinated the operas creators in the newly psychologically aware 1900s  one reason why this opera is not some 19th-century Romantic dinosaur recreation (or indeed an oratorio in disguise). Saul  a riveting performance from Johan Reuter in both voice and acted intensity  is not a bad man but he cannot bring himself to let go of the attention which comes with power and has to take his own life to avoid his prophet (or founding father) Samuels final dismissal of him. [...] Orchestra and conductor unroll their home composers score with richness and dexterity. That and the feel of a home company at work add up to a result just that bit more ethnic-sounding than Chandoss (very adequate) Neeme Järvi recording (3/91). The filming seems most sympathetic to the productions needs. Hugely recommended  a far more powerful vote for this opera than the cartoon-like version you may access online. Mike Ashman
Gramophone March 2016