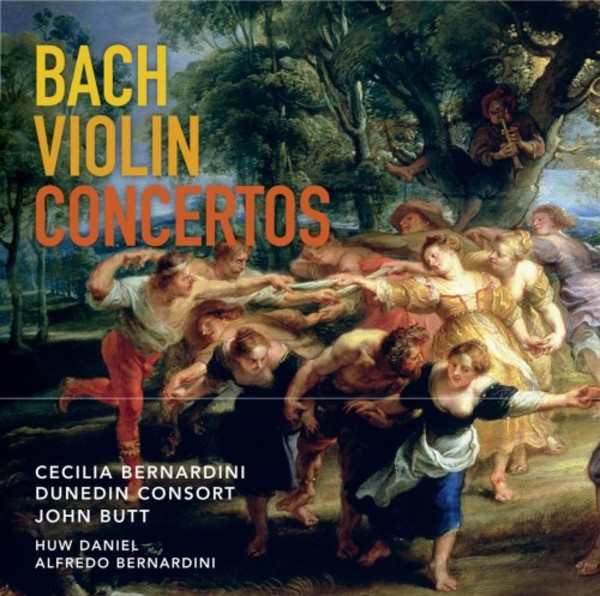 The Dunedin Consorts formidable reputation for performing Bach is set to scale new heights with this highly anticipated recording. Dutch-Italian violinist Cecilia Bernardini takes a break from leader duties as she steps into the spotlight to deliver a virtuoso performance under the direction of Bach specialist John Butt OBE.

Opening the program is the colourful and joyful concerto for violin and oboe (Alfredo Bernardini oboe) with its supremely lyrical central movement. Two of Bachs solo violin concertos, each overflowing with inventive detail, and the Sinfonia with solo oboe that opens Cantata 21, follow. The program culminates in one of Bachs greatest masterpieces - the Double Concerto for two violins (Huw Daniel violin), with its famous and sublime slow movement.

Although Bach was most famous as an organist and keyboard player, he was also a fine violinist; his idiomatic writing and characteristic flair is evident in the many dazzling moments he creates.

The Dunedin Consort has established a reputation as one of the leading exponents of historical performance, under the direction of prize-winning historical performance specialist John Butt OBE. In addition to a GRAMMY nomination, Dunedin Consort has won two Gramophone Awards: the 2007 'Baroque Vocal' Award for Handel: Messiah and the 2014 Choral Award for Mozart: Requiem. Dunedin Consorts first instrumental release, J.S. Bach: Six Brandenburg Concertos, was named Gramophone 'Choice' and awarded five stars by both BBC Music Magazine and The Guardian.

Violinist Cecilia Bernardini takes nothing for granted in this recital of Bach concerts with the Dunedin Consort. Her bowing is both fluid and crisply detailed  Anna Picard
BBC Music Magazine April 2016

This recording has elegance at its heart with Bernardini showing a nice feel for the dynamic contrasts and varied repetitions in the A minor and E major concertos. Two of the highlights are when she is joined by her father, the baroque oboist Alfredo Bernardini, for the C minor Concerto for violin and oboe, and as an extra treat the Sinfonia from Bachs Cantata no.21.  Andrew McGregor
Record Review (BBC Radio 3) 19 March 2016

There are so many things to marvel at: her husky, shapely tone, her earthy way with rhythm, how she tugs playfully the top of phrases, her ability to dart in and out of ensemble textures and make the whole thing so joyously convivial John Butt conducts with all the exuberance and swing and fine lines weve come to expect from the Dunedins.  Kate Molleson
The Guardian 11 March 2016