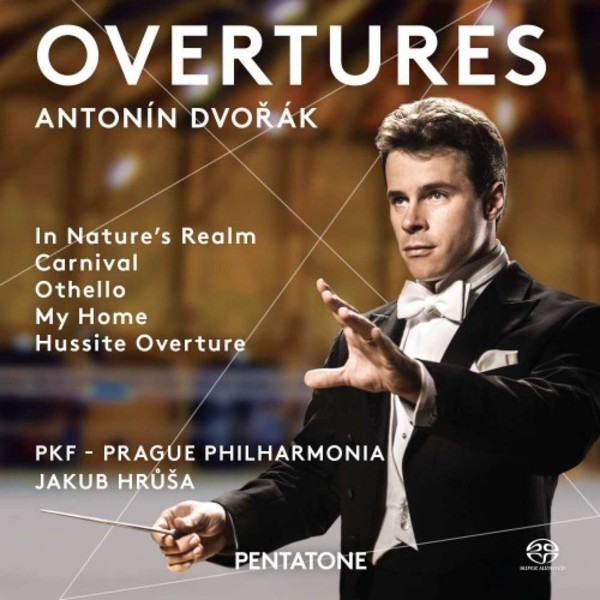 Thanks in large part to the effort of Johannes Brahms, who introduced him to his publisher Simrock, Czech composer Antonín Dvořák developed into a composer with an international reputation. Dont we all know his Slavonic Dances, his symphonies or his chamber music, such as the Dumky Trio or the American Quartet? This album reveals some of the more hidden treasures of Dvořáks repertoire, namely his overtures, of which he wrote no fewer than thirteen. In the
booklet to the album they are described as follows:

All five overtures on this recording are richly and vividly scored, employing palettes of instruments broader on average than those found in Dvořáks mature symphonies and sometimes calling for special effects. For their orchestral colour but also their rich expression of poetic content, as well as their purely musical invention and structural mastery, these overtures constitute gems of special brilliance in the treasury of Dvořáks compositional bequest.

The PKF  Prague Philharmonia recorded this album in January 2015 at the Forum Karlín in Prague under the baton of Jakub Hrůa, their Music Director and Chief Conductor from 2009-2015.

The new Ondine disc (see here) from Christian Tetzlaff, accompanied by the Helsinki Philharmonic and John Storgårds, presents a popular coupling that is always welcome: Dvořáks evergreen Violin Concerto, sandwiched between his son-in-law Josef Suks splendid Fantasie in G minor and Dvořáks own beautiful F minor Romance for violin and orchestra. Tetzlaff has recorded both the Dvořák Concerto before, but not the Suk, though youd never know it listening to this tremendously assured account. Its atmospheric, highly-charged and, in places, appropriately fantastic in the fullest sense, with vivid orchestral effects leaping out at the listener. At 23 minutes, its a substantial single-movement work, and Tetzlaff more than most violinists gives the music its due, taking the technical challenges in his stride and presenting a compelling and cogent musical argument.

Tetzlaffs latest account of the Dvořák Concerto reaps the benefits of long experience: he knows every nook and cranny of this music, which he negotiates with a deft hand and a wide tonal palette. While never losing sight of the overall lightness of mood, he knows when to dig in a little more to the textures, bringing out the passion of the opening movement, and the drama of the hymn-like Adagios central minor-key section (aided by some exquisite wooodwind and horn playing). The finale is a real delight, properly giocoso for the rondo theme, but with nicely contrasted episodes in between. Theres a taut muscularity to the Tetzlaffs tone that with any other performer might sit ill with Dvořáks music, but he knows exactly when and how best to deploy it (the minor-key gypsy-like theme in the third movement is a case in point), and it raises the stature of the work as a whole.

The Romance then provides the loveliest of foils to close the disc, in a performance of melting delicacy and poise. Its music of real depth, but with an easy, folk-like manner that speaks directly to the soul, and orchestra and soloist seem perfectly attuned to conveying this with playing of limpid loveliness. Even against some very strong competition in the catalogue, this new disc makes an immensely strong impression.

So, too, does another Dvořák disc, on the Pentatone label and with Czech forces. Rising star Jakub Hrůa (principal conductor designate of the Bamberg Symphony Orchestra) conducts the PKF-Prague Philharmonia in the composers five self-standing overtures. Two of them, My Home and Hussite, were written for performance with plays, and have strongly patriotic subjects which the Prague musicians know how to tap into without overdoing things. These are robust but carefully-honed performances, which comfortably withstand repeated listening.

Its the other three works, however, that provide the real meat here: the Nature, Life and Love trilogy of the early 1890s. Bound together by a recurring theme said to represent the composer himself, In Natures Realm, Carnival and Othello represent a transitional phase between the non-programmatic world of the symphonies and the detailed narratives of the late symphonic poems. Where Hrůas performances really make their mark is in the loving care with which theyve been prepared: there may have been more characterful performances, but few if any which so consistently bring out the sheer beauty of Dvořáks writing. Even with the Prague Philharmonias smaller forces, theres a radiant bloom to the sound which enhances both the high spirits of Carnival and the high drama of Othello. In a far from crowded market, this new release will be warmly received by Dvořák lovers.

Dvoraks overtures, once popular concert openers, have become rarities of late, even on disc. Hrusas programme with the excellent Prague Philharmonia puts the 1891-92 trilogy, In Natures Realm, Carnival and Othello, centre stage. Dvorak initially intended all the pieces to be played in sequence, as here, but they rarely are. The Czech musicians play this music, and the earlier My Home and Hussite, with native zeal: glorious woodwinds evoke Dvoraks al fresco scenepainting. Hugh Canning
The Sunday Times 14 February 2016