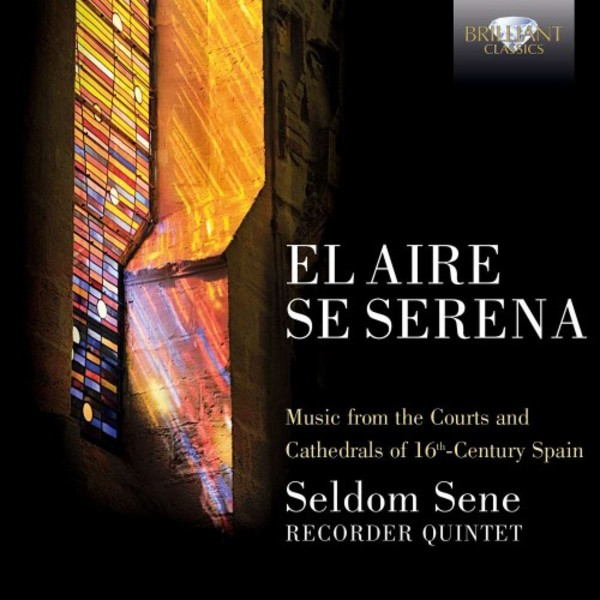 This beautifully conceived CD presents music from the Courts and Cathedrals of 16th-century Spain. The composers include Cabezón, Guerrero, Peñalosa, Vasquez, Morales, Victoria, Milano, Lobo, Torre and Caroso. One of the main practices in 16th-century Spain was the transcription or arrangement of vocal music from the Franco‐Flemish School. Masses, motets and madrigals by Gombert, Josquin and others were transcribed for instrumental ensembles.

Taking inspiration from Fray Luis de León, the 16th‐century lyric poet and monk, Seldom Sene have selected an enthralling collection of music for their second album. El aire se serena  a line from one of Léons poems  translates as The air becomes serene, setting the tone for the beautifully atmospheric music of the album. The
Quintet have selected a vast array of secular and sacred works, from the well-known composers Antonio de Cabezón and his son Hernando, to the more neglected but at the time equally prolific composers, such as Francisco de Peñalosa and the dance master Fabritio Caroso. Much of the release is dedicated to sacred music, with works such as Josquins five‐voice motet Inviolata, integra et casta est Maria and Lamentabatur Iacob, written by Josquins successor Morales, who styled himself on the Spanish composer.

Three works take the theme of Philippe Verdelots lively madrigal Dormendun giorno a Baia, depicting a group of nymphs who take revenge on Loves trickery while he sleeps. As well as Verdelots original work, there is an instrumental version by Antonio de Cabezón and a section from Francisco Guerreros Missa Dormendo un giorno, an illustration of the remarkable fluidity between vocal and instrumental music as well as the sacred and secular
genres in 16th‐century music. As well as instrumental music and transcriptions of vocal music, the album includes a number of dance tracks: the famous [Danza] alta by Francisco de la Torre, and Francesco da Milanos Bassadanza are two rare examples of notated dance music in a discipline that was usually improvised by the musicians on the spot.

Seldom Sene is a recorder ensemble from the Netherlands which has been toogether since 2009 and they have grown rapidly in prominence, winning first prize at the International Van Wassenaer Early Music Competition at the Utrecht Early Music Festival in 2014. They perform these works on modern recorders carefully modelled after originals, selecting the most appropriate instrument for each work. The ensembles aim is to translate the typical phrasing, blending, flexibility and expression of a vocal ensemble into an instrumental performance, and recreate the sense of Serenity and Brilliance as is described in the CDs title.

Seldom Sene has already recorded a successful CD for Brilliant Classics, Taracea (BC94871), of which Gramophone wrote: commitment, technical versatility, unanimity of ensemble and near‐immaculate tuning on display. The Dutch
periodical Early Music Review wrote: Seldom Sene perceptively exploited a range of contrasting textures, and was the only ensemble of the day whose memorisation of the dots enabled unbridled spontaneity.