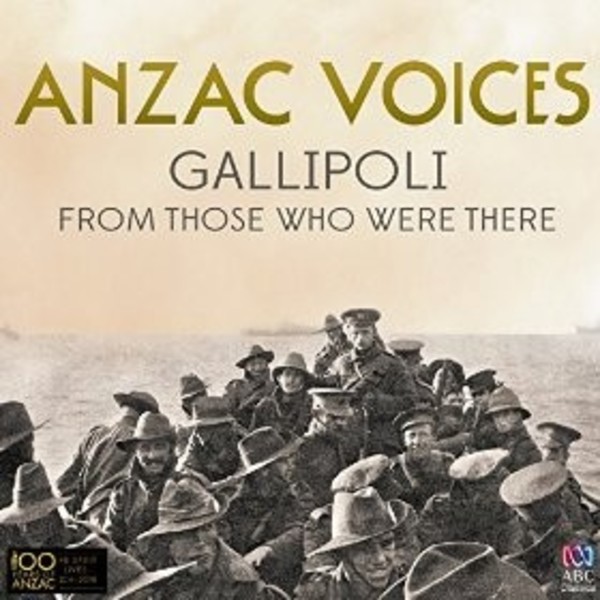 Anzac Voices: Gallipoli From Those Who Were There

Anzac Voices is the story of Gallipoli, told by those who lived through it: regular troops, senior commanders, stretcher-bearers, signal operators, a nurse and a Turkish general, as well as Australia's official war correspondent.

The transcendent voice of music interweaves these accounts, providing a poignant musical reflection on this nation-defining event from composers including Ralph Vaughan Williams, Edward Elgar, Peter Sculthorpe, Ross Edwards and Frederick Septimus Kelly, whose Elegy was sketched behind the lines at Gallipoli.

Recorded between 1953 and 1990, the compelling and deeply emotional first-hand accounts drawn from the ABC Archives recall in graphic detail the circumstances and events of the Gallipoli campaign, from the innocence of enlistment to the horror of the landing and - for those who lived to tell their story - the bitter relief of homecoming.

CD 1:
Enlistment: 'Most of the fellas treated it as a bit of a joke'
Life on Gallipoli: 'Everything on Gallipoli rattled your nerves'
Johnny Turk: 'I had no ill feelings about him'
Gallipoli, first landing (25 April): 'They weren't prepared for the slaughter'
The Evacuation: 'I wanted to run'
Aftermath: 'I was one of the lucky ones'

CD 2:
The Turkish Offensive and Armistice (1925 May): 'They were going to push us back into the sea'
Albany to Lemnos: 'We never did give the Dardanelles a thought'
Towards Gallipoli (24/25 April): 'Butterflies in the tummy'
Lone Pine (610 August): 'The fiercest battle you've ever seen'
Gallipoli, subsequent landings (25 April): 'I expect they can all swim'
Reflections on mortality: 'Death was funny in those days'