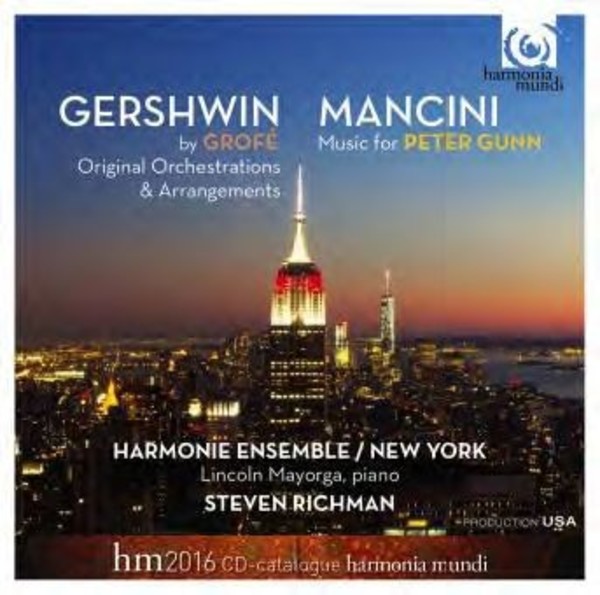 » I'll build a stairway to paradise
» Somebody loves me
I Got Rhythm Variations
Lady be good!

» Fascinatin' rhythm
» The Man I Love
Porgy and Bess

» I'll build a stairway to paradise
» Somebody loves me
I Got Rhythm Variations
Lady be good!

» Fascinatin' rhythm
» The Man I Love
Porgy and Bess

Grammy-nominated Steven Richman and the sensational Harmonie Ensemble New York recreate Henry Mancinis trend-setting jazz score for 'Peter Gunn' and revive the original orchestrations of George Gershwin favourites, including 'Rhapsody in Blue' made by the composer and by Ferde Grofé in the 1920s and 1930s.

In 'Music for Peter Gunn', alongside ace old-school improvisers Lew Soloff [trumpet] and Lew Tabackin [sax], they place their own stamp on these iconic orchestrations in the first recording since Henry Mancini's own in 1958.

"This disc takes you back to the interwar years, when George Gershwin was breaking out of Tin Pan alley. Pianist Lincoln Mayorga and the Harmonie ensemble of New York under Steven Richman present Gershwin's own orchestrations, plus seven by Ferde Grofé. It's wonderful, too, to hear the great reedman Al Gallodoro, who died in 2008." - ***** Tully Potter, Daily Mail, 26 March 2010

"This disc would be worth buying for the Rhapsody alone, but we also get original Paul Whiteman Orchestra versions of Gershwin standards, and the composers own orchestration of the quirky, underrated I Got Rhythm Variations. Playing and direction are faultless, with marvellous piano playing from Lincoln Mayorga. As a novelty bonus, one track is duplicated, recorded on a 1909 Edison wax cylinder." - Feelgood CD of the Month, TheArtsDesk.com, May 2010

"This is the most consistently pleasing recording Ive heard this year, with Mayorga, Gallodoro and Richman coming over as formidable Gershwin exponents. Oh, and if you think youve already got as many versions of Rhapsody in Blue as your credit card can handle, think again." - International Record Review, July / August 2010