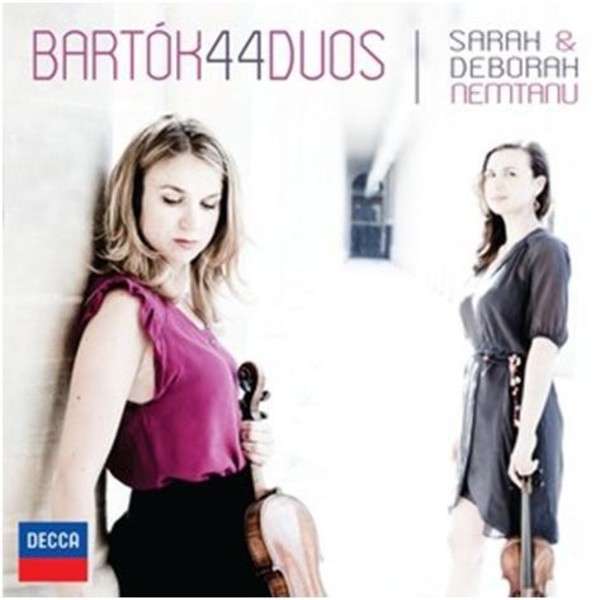 The Nemtanu Sisters Romanian blood makes them the perfect, idiomatic interpreters of Bartoks 44 Duos: all the songs and dances are based on folk music from many Eastern Europe countries. The harmonic and rhythmic freedom demanded by the music is second nature to them, as demonstrated in the notable track 38 - Forgatós: Romanian Whirling Song.

No strangers to the recording studio, the sisters have previously recorded the Bach Double Concerto to critical acclaim. Norman Lebrecht chose it as a Disc of the week on Sinfini Music: Their musical dialogue is full of fascination, alternately confrontational and playful, challenging and interactive.

Sarah and Deborah Nemtanu stick strictly to the published sequence, and so the music becomes meatier as the series progresses. They play all these pieces to the manner born, and are particularly impressive in the Arab-inflected dances, which they dispatch with fiery freedom.  Misha Donat
BBC Music Magazine June 2016

They are both fiery players and they egg each other on in sparky, intuitive exchanges, but theyre used to making big, glossy solo sounds, which swamp the simpler pieces. Their best moments come when theyre at their most introspective: the sombre Wedding Song (Number 13) or the strange, sinewy New Years Greeting (Number 21). Kate Molleson
The Guardian 15 January 2016