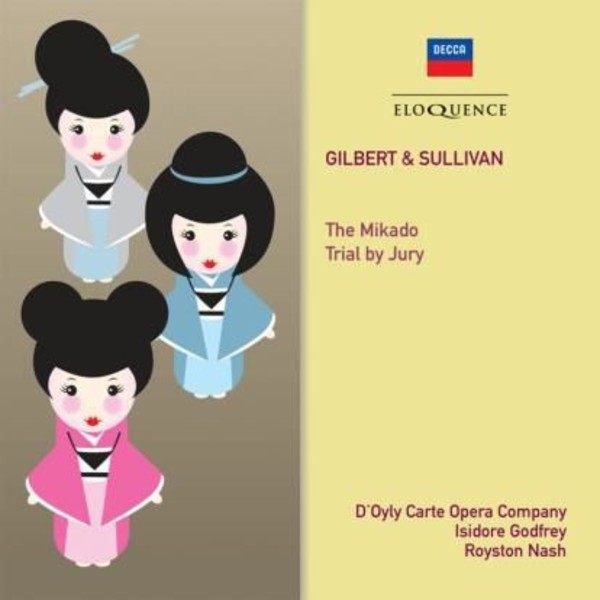 The Mikado
Trial by Jury

The Mikado
Trial by Jury

Continuing the very successful series of Gilbert and Sullivan recordings on Decca Eloquence - this is the first time the recording has appeared on the label.

Bursting onto the scene with a sensational two-year run at the Savoy Theatre (672 performances commencing on 14 March 1885), it was not long before The Mikado was playing around the world in myriad different productions and translations  and it continues to be greeted with unparalleled global enthusiasm today.

This October 1957 recording of the opera marked the start of a new, and for many collectors golden, era for the DOyly Carte company on record. Made only seven years after a very fine post-war LP set, this remake benefits from remarkably present stereo sound. The orchestral playing is of an appreciably higher standard than in the previous version and, following a major changing of the guard with company principals in the mid-1950s, the set features a strong array of soloists.

Performed 300 times in its first two years, Trial by Jury was an acclaimed success that cemented the symbiotic relationship between composer and librettist. This 1974 recording, part of the DOyly Cartes last cycle of Savoy Operas for Decca, was released the following year in a busy season celebrating the centenary of the works first performance and the foundation of the company. As with its 1963 predecessor, most of the principal roles in this Trial recording are taken by the companys leading lights  notably star patter-man John Reed, on sparkling form as the Judge  rather than the artists who routinely played them on stage.


The new Decca set will hold its own for its authenticity among real lovers of Gilbert and Sullivan - (The Mikado) Gramophone, August 1958