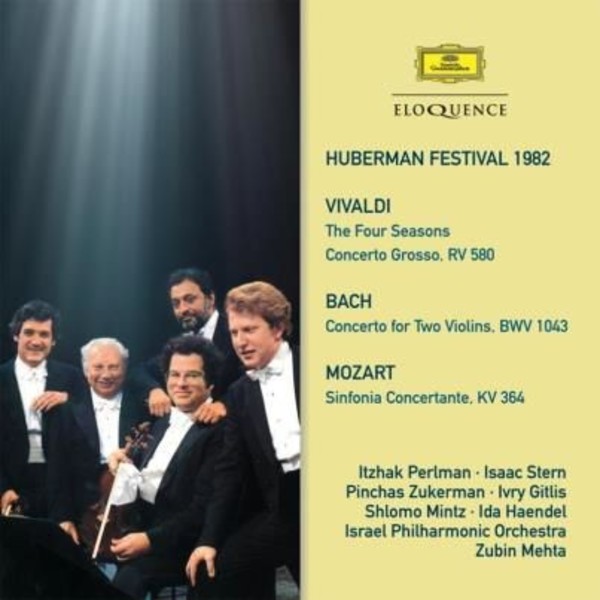 First release on CD of all the items on Deutsche Grammophons 2-LP set of the 1982 Huberman Festival.

An extraordinary galaxy of violinists came together in Tel Aviv in December 1982, for a week of concerts to celebrate the life and vision of Bronislaw Huberman. He was the great Polish violinist, born in 1882, whose Pan-European political beliefs were deeply affronted by the rise of the Nazis in Germany. He spent much of the 1930s trying to get Jewish musicians out of the clutches of Adolf Hitler, and in 1936 his efforts resulted in the founding of the Palestine Orchestra, which in 1948 became the Israel Philharmonic.

Despite being involved in a terrible air crash which might have ended his career, Huberman continued to work on behalf of the orchestra until his death in 1947.

As Tully Potter notes in his commentary for this release, the great virtue of the 1982 Tel Aviv performances is that they feature artists who feel at home with the Israeli orchestra and audience and have nothing to prove: they can simply get on with it and make good music.

With an extraordinary galaxy of violinistic talent plus first-class digital recording, this set must receive an unqualified and enthusiastic recommendation. [] Detail and focus are admirable [] There is a pervading beauty and freshness to the sound. [] To a quite remarkable degree the performances combine the spontaneity of a real concert with the polish one normally expects in the studio. Obviously the players are deeply committed, yet equally obviously they are enjoying themselves. [] It seems to me this is a set to treasure for what it is, a rare recorded example of live music-making, where the electricity is consistently at a high voltage. - Gramophone, November 1983