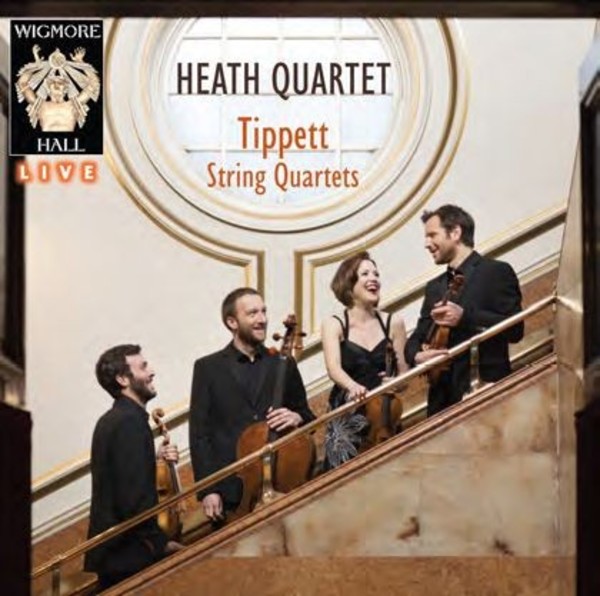 Sir Michael Tippetts complete String Quartets are given fresh perspectives by the vibrant and adventurous Heath Quartet. The first ensemble in 10 years to receive the Royal Philharmonic Societys Young Artist Award, the Heaths bring irresistible energy to these works.

From Quartet No.1, premièred in what was the first professional performance of the composers music, and Quartet No.3, written during the Second World War whilst Tippett, a committed pacifist, faced a prison sentence, to his landmark fifth and final quartet, Tippetts stirring and powerfully individual writing is recorded in the intimate acoustic of Wigmore Hall.

Since being selected by YCAT and winning 1st Prize at the Tromp Competition in 2008, the Heath Quartet has forged a strong international presence. In 2011 they were awarded a prestigious Borletti-Buitoni Special Ensemble Scholarship and undertook complete Beethoven cycles at the Facyl Festival in Salamanca and in Edinburgh. Highlights over the last year have included recitals at Wigmore Hall as part of the Emerging Talent scheme, including the premiere of a new work by Luke Bedford and collaborations with Stephen Hough and Ian Bostridge.

The admirable Heath Quartet, formed at the Royal Northern College in 2002, played the [Tippett] cycle in four concerts at Wigmore Hall, from which these incisive, vibrant performances are taken. [...] Well worth exploring. Fiona Maddocks
The Observer 17 January 2016

These works are all rewarding and do not suffer from the same failings as some of his later works in other genres. The Heath Quartet bring to them splendid energy and commitment  if you want a recent set played by an ensemble which accepts these works on their own terms as part of the repertory the Heath Quartet will do very well.  Stephen Barber
MusicWeb International March 2016

The Wigmore hush  and the Heaths response to it  is most beneficial in the long, fragile span of the Fifths finale. Caution is thrown to the winds most memorably in the Fourth Quartet, the cycles charged flashpoint. The Heaths maintain tension throughout, withholding arrival-points from this birth-to-life narrative, whereas The Lindsays allow breathing space in the central, Bartókian nocturne. Both approaches are persuasive, but no one has dramatised the finales palindrome, with a spooky hall of mirrored harmonics at its centre, with the poise of the Heaths. A tremendous achievement. Peter Quantrill
Gramophone March 2016