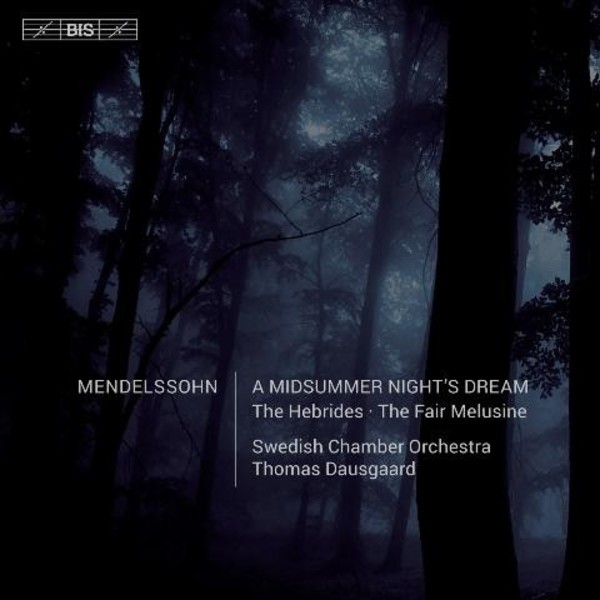 Following a series of acclaimed recordings of 19th-century music including complete cycles of the symphonies by Schubert and Schumann, Thomas Dausgaard and his Swedish Chamber Orchestra turn to Felix Mendelssohn.

The teams latest offering unites three of the composer's four celebrated concert overtures, written between 1826 and 1835 and setting new standards for this emerging genre. The earliest of the three  A Midsummer Nights Dream  was composed by Mendelssohn at just seventeen, and his sister Fanny later remarked how Shakespeare's play had been a constant presence at their home, and how at various ages we had read all the different roles, from Peaseblossom to Hermia and Helena

The overture immediately became one of Mendelssohns signature pieces, and seventeen years later he returned to it, composing additional incidental music for a stage production of the play. Written for soloists, women's choir and orchestra, the complete Midsummer Night score is included here.

The disc opens with the last of the four overtures to be composed, however: The Fair Melusine, which Mendelssohn wrote after having heard an opera based on the old French tale of the water spirit Mélusine and her sad fate. Actively disliking the opera, Mendelssohn was provoked into his own musical setting of the subject matter in the form of a concert overture.

Water  and its depiction in music  also plays an important role in The Hebrides, the closing work on the present recording. Inspired by the poems by Ossian  which captured the imagination of an entire generation at the beginning of the Romantic era  Mendelssohn visited Scotland and the Hebrides in 1829, and already during this trip he sent a postcard to his family, with the overture's famous opening written down in a four-part setting.

Thomas Dausgaard and his Swedish Chamber Orchestra steal a march on Edward Gardner's ongoing 'Mendelssohn in Birmingham' series for Chandos, with this new and exceptionally vivid recording of the Midsummer Night's Dream music. Gardner's version  due out in January  is sure to be interesting, not least to those following his series, but it will be hard-put to surpass this disc from BIS, which positively fizzes with stylishness and exuberance.

Dausgaard has been at the helm of the Swedish Chamber Orchestra for the best part of two decades, and in that time he has shaped them into a highly sensitive ensemble, alert to the possibilities of applying period performance style to modern instrument (much as the Scottish Chamber has done under Mackerras and others). Woodwind and brass are pert and characterful, the timpani have an authentic earthiness, while the strings minimise vibrato and instead apply expression chiefly with the bow.

The disc opens with the Overture The Tale of the Fair Melusina. This underrated work is based on the story  so popular in the Romantic period  of the doomed love of a water sprite. Instead of following the plot slavishly, Mendelssohn gives us a more generalised mood-painting, in which the opening woodwind curves (shamelessly lifted by Wagner for the opening of Das Rheingold!) suggest Melusina's watery environment, while a contrasting, dramatic minor-key theme points to her earthly tribulations. This overture was one of Mendelssohn's personal favourites, and in this compelling performance it's easy to hear why, the contrasting colours of the themes highlighted without a hint of edginess.

Inevitably, the highlight of the disc is the Overture and incidental music to Shakespeare's A Midsummer Night's Dream, and even compared with the best available performances (we listened to a selection including Mackerras, Nelson, Ozawa and Previn), this new account stands out by virtue of its natural elfin flair and vivacity. Speeds are brisk but never sound garbled, and it's remarkable just how gossamer-light Dausgaard can make Mendelssohn's textures. The Overture itself shaves a good sixty seconds off most other performances and has seldom sounded so miraculous: an astonishing achievement by the young Mendelssohn. Strings trip along with uncommon sprightliness, horns ring out clearly, and Bottom's braying is delivered with real élan.

The incidental music  given complete, but without the spoken Shakespeare lines included in some performances  is just as winning. Camilla Tilling, Magdalena Risberg and the women of the Swedish Radio Choir make an ideally light, spirited band of fairies in 'You spotted snakes' and 'Through the house give glimmering light' (both sung in German, as they were at the original performances in Potsdam). The other set-pieces  the Scherzo, Intermezzo, Nocturne and Wedding March  sound as fresh as the day they were composed, which is no mean feat with such well-known music. One reason for this is that Dausgaard and his players never take the music for granted, constantly shaping and rethinking phrases, textures and balance. Even the shorter numbers  some of them little more than bridge passages to underscore dialogue  have a sense of involvement that too often eludes other performances. This is just about as good as it gets in this music, and it would be a hard-hearted listener indeed who failed to respond to this truly enchanting performance.

The disc finishes as it began, on a watery theme  in this case the Hebrides Overture. Mendelssohn's sea picture, with its swirling string writing, can too often sound clogged and opaque. Not so here: this is a remarkably bracing and lifelike voyage, with transparent textures, dramatic surges and thrilling tempi. It rounds off a disc that serves as a timely reminder of Mendelssohn's vibrant, evergreen genius. No praise could be higher - a possible late entry into our 'Discs of 2015'? Watch this space!