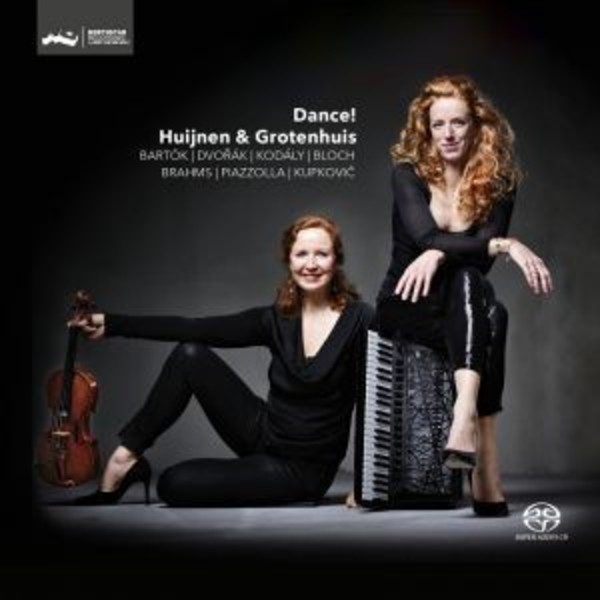 Dance! features the seldom heard combination of violin and accordion. Not much repertoire has been composed for this pairing of instruments, so all of the varied music here - including well-known pieces by Brahms, Bartók, Dvorák and others - has been expertly arranged.

Its performed by two top Dutch musicians: violin virtuoso Cécile Huijnen is first concert master of The Arnhem Philharmonic Orchestra, a position she has held since 2000, and Marieke Grotenhuis is one of the foremost accordionists in the Netherlands.

The music ranges from the popular - Bartóks Romanian Folk Dances, one of Dvoraks Slavonic Dances and his Humoresque, and three Hungarian Dances by Brahms - to the rarely heard. The latter include Kodálys Three Hungarian Dances, the inspiration for which was found early in his youth, from gypsy concerts in his birthplace Galantá, and a 1905 adagio originally written for a sonata for viola and piano.

Abodah was written by the Jewish-Swiss-American composer Ernst Bloch in 1929 for the then 12-year-old violinist Yehudi Menuhin. In his four-part Histoire du Tango (two of the pieces are performed here), originally written for flute and guitar, Astor Piazzolla painted the musical history of the tango.

The disc ends with Souvenir by Slovakian-German composer Ladislav Kupkovic (b.1936), a frivolous piece, with lots of fun and puns about violin techniques in Cécile Huijnens description. Violinist Gidon Kremer has proved himself to be a real ambassador for the work, regularly performing it in concerts.