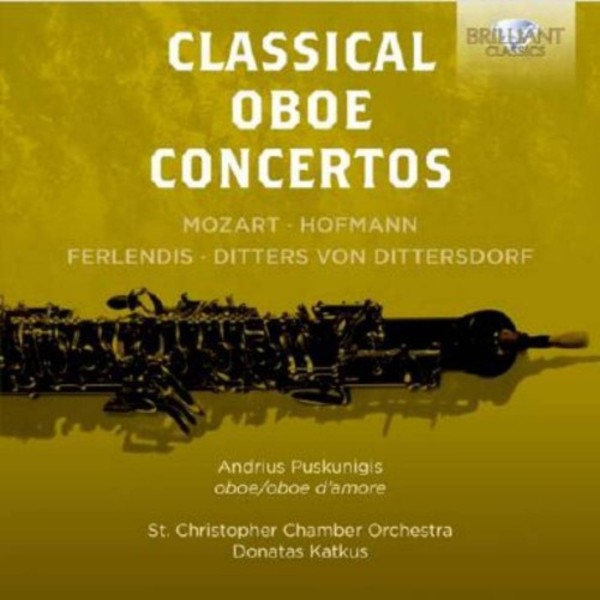 Oboe d'amore Concerto in A major

Oboe d'amore Concerto in A major

From around 1750, the oboe, an instrument hitherto largely used in chamber music and church music, began to make its way into the concert halls, and to be played by virtuoso soloists.

The Oboe Concertos on this new recording represent the Classical Viennese Style, with Wolfgang Amadeus Mozart as its undisputed genius. Although the other composers, Ferlendis, Ditters von Dittersdorf and Hofmann are lesser known, their Oboe (or Oboe dAmore) Concertos share the same grace, sparkle and melodious flow as Mozarts masterwork.

Andrius Puskunigis, a Lithuanian, is first oboist of the Heidelberger Sinfoniker under Thomas Fey, and as such is a specialist in Authentic Performance Practice. His earlier recording for Brilliant Classics, the Bach Oboe Concertos (BC94991), won international praise for its stylistic purity, transparence and 'Spielfreude'.

The St Christopher Chamber Orchestra is one of the finest groups from Lithuania. They have recorded over 20 CDs, for BIS, Fleur du Son, Ambitus and other labels.