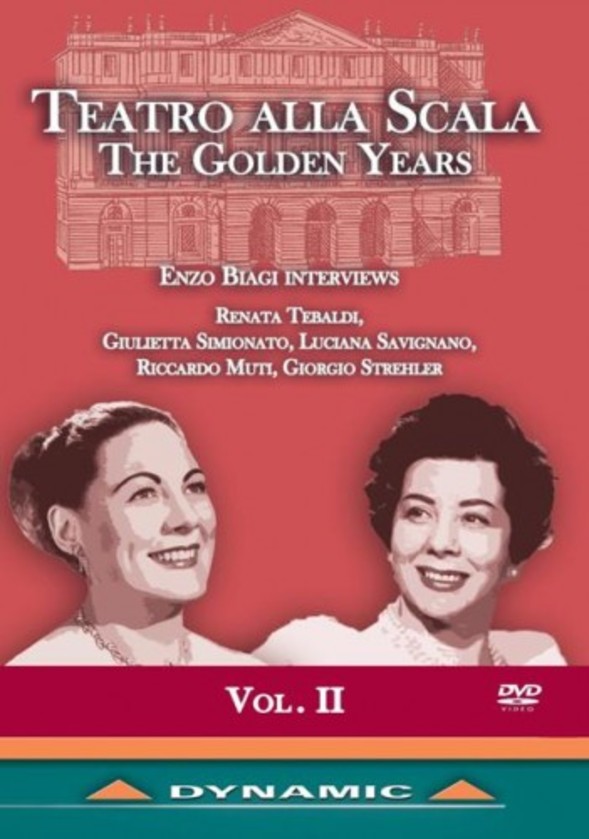 Milans La Scala theatre, as told by the protagonists of its golden years.

Enzo Biagi was one of Italys most famous and beloved journalists. His fondness of the prestigious Milanese venue led to the programmes we are now presenting on DVD, made in 1981/82. Documenting the La Scala productions of those years, Biagi entered the theatre during the rehearsals and interviewed the protagonists (conductors, singers and directors), not only the figures of those days but also the great stars of the past.

The series was originally produced on 16 mm film, and is now restored and offered to the public at large by Dynamic.

Highlights:
- Unpublished, never-seen-before footage of Enzo Biagis interviews, now restored and presented on DVD.
- La Scalas Ballet School: Enzo Biagi meets one of the great stars of La Scalas ballet dancing, Luciana Savginano.
- Maestro Riccardo Muti and Giorgio Strehler are interviewed during the rehearsals of La Scalas 1982 production of 'The Marriage of Figaro' and tell us about the relationship between conductor and director.
- Renata Tebaldis 'angel voice': her debut, her audition with Toscanini, her relationship with Maria Callas and the rivalry between these two great sopranos of last century.
- The 'Amici del Loggione', an association of opera lovers formed in 1973, animatedly discuss singers, directors and conductors.
- Finally, a talk with Giulietta Simionato: her debut, her memories of Maestro Arturo Toscanini and of Maria Callas.