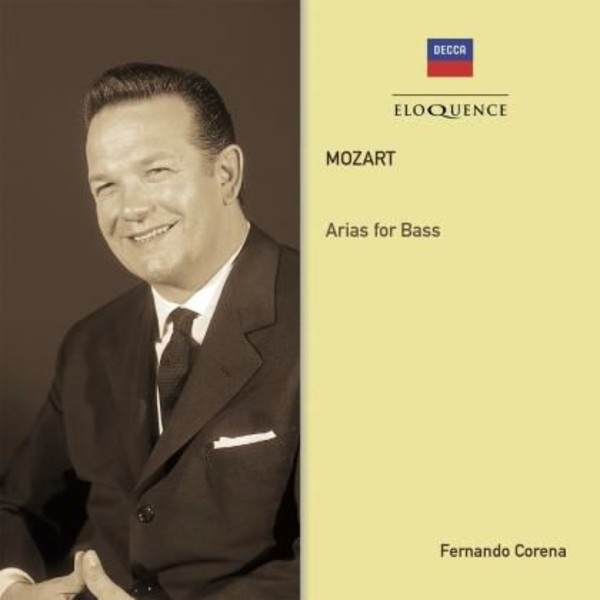 A new collection, bringing together all of Fernando Corena's Mozart aria recordings, recorded at sessions in Rome and Geneva in 1952 (Le nozze di Figaro and Don Giovanni) with Alberto Erede and Peter Maag, and in London with Argeo Quadri (six concert arias).

At his peak in the 1950s and 1960s, Corena was the 'basso buffo' of choice in many of the worlds leading opera houses and on disc. At the Metropolitan (where he notched up more than 700 performances between 1954 and 1978), he was a favourite Leporello, Don Pasquale, Falstaff (which he also sang to acclaim at Glyndebourne and at the Edinburgh Festival), Gianni Schicchi and Fra Melitone (La forza del destino); and he virtually owned the role of Doctor Bartolo in Il barbiere di Siviglia.

Combining a voice of fine, oaky resonance, verbal dexterity and a flair for comic invention, Corena stood worthily in a noble line that stretched back a century and more.

Born in Geneva to a Turkish father and Italian mother, the young Corena initially planned to take holy orders before success in an amateur singing competition persuaded him to change tack. After studies in Milan, encouraged by the conductor Vittorio Gui, he made what was in effect his professional debut in Trieste in 1947, as the rascally monk Varlaam in Boris Godunov.

In a career that spanned over thirty years, Corena initially sang non-buffo roles, including Sparafucile, Escamillo and Scarpia  the last two a tribute to his free-ringing upper register, rare in a comic bass. But his malleable features and innate gift for comic timing and stage business soon made him a natural for the Italian buffo repertoire. Mozart, inevitably, featured large in his 30-year career.

Corena sings with a fine, resonant, clean tone. His production is easy and completely natural, and his diction, phrasing and general musicianship are most praiseworthy. - (Corena/Maag) Gramophone, December 1952