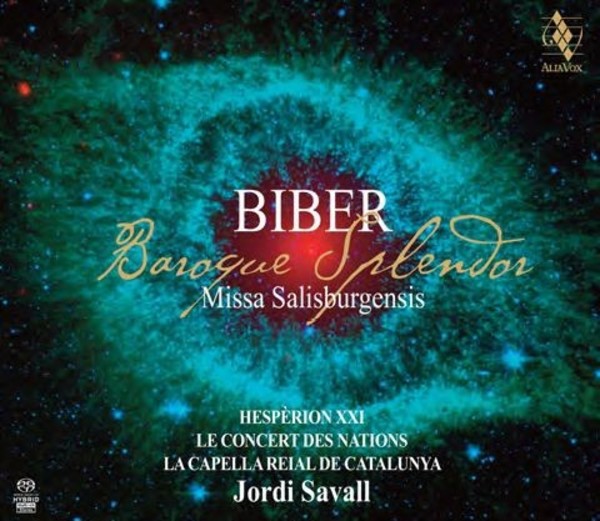 The 'Missa Salisburgensis à 53 voci' (in comparison, 'Spem in alium' was written by Thomas Tallis for 'only' 40 voices) is perhaps the largest-scale piece of extant sacred Baroque music, an archetypical work of the Colossal Baroque. It is a polychoral composition which takes advantage of the multiple organs and various locations available for groups of singers and musicians to perform in Salzburg Cathedral, probably for the 1682 celebrations marking the 1100th anniversary of the founding of the Archbishopric of Salzburg.

This stunning recording features Jordi Savalls ensembles at their best and fully reveals the splendour of this masterpiece. A recording of cosmic proportions that Jordi Savall has decided to illustrate with a celestial image of the Helix Nebula, nothing less.

Heinrich Biber was one of the greatest violinists of the mid-Baroque, and for many years his reputation as a composer rested on his virtuosic violin music. But he spent most of his life in the service of the church, and in recent decades his sacred music, which includes masses, motets and two fine requiems, has begun to receive the attention it deserves. Of these, by far the most opulent is the Missa Salisburgensis, which was once thought to have been composed in 1628 by Orazio Benevoli, but is now recognised as being the much later work of Biber.

The Mass was written in 1682 to celebrate Salzburg's 1100th anniversary as a centre of Christianity, and is scored lavishly for no fewer than fifty-four vocal and instrumental parts. Designed for antiphonal performance in Salzburg Cathedral, it placed the musicians in seven spatially separated groups, four of them in the organ galleries under the cathedral's dome. Court and military trumpeters emphasise the temporal power of Salzburg's spiritual princes, while grand tutti statements are juxtaposed with exquisite vocal and instrumental solos.

Given the numbers and logistics involved, recordings of the Missa Salisburgensis are few. This magnificent new account from Jordi Savall and his combined forces hits just the right balance between grandeur and intimacy. Captured in January 2015 in the spectacularly situated collegiate church of Sant Vicenç, at the Castle of Cardona in central Catalonia, the recording combines spaciousness, warmth and detail in equal measure. The fine solo work emerges distinctly, as do the various vocal and instrumental 'choirs', but it is the impact of the tuttis that makes the biggest impression. Savall has rethought many of the tempo relationships so that, even if you already possess a recording of this splendid work, this new one will likely shed fresh light on the music.

The couplings are just as thrilling. They include the motet Plaudite tympana ('Beat the drums, sound the trumpets'), scored identically to the Mass and intended for the same occasion in 1682, as a hymn in praise of Salzburg's founding archbishop, St Rupert. The music is wonderfully dynamic, with phrases tossed from one choir to another in a swirl of sound. It's preceded, appropriately, by a pair of fanfares for trumpets and drums by Biber's contemporary, Bartholomäus Riedl.

Another Biber work with a Salzburg connection is the majestic Sonata Sancti Polycarpi for two groups of trumpets and timpani plus continuo, composed to honour Polkarp von Kuenberg, possibly on his 1673 installation as provost of Salzburg Cathedral. It gives the brass players  never the shyest of breeds  yet another chance to shine.

To complete the disc, there's a splendidly entertaining 2002 recording (from the same venue) of Biber's famous Battalia à 10. Scored for an ensemble of strings plus continuo, this is a vividly programmatic depiction of 'The tuneful enthusiasm of the musketeers, the march, the battle and the lament of the wounded, imitated with arias and dedicated to Bacchus.' Sound effects imitating the fire of weaponry abound, and there's a riotous quodlibet of superimposed folk melodies evoking the drunken revelries of the soldiers. It's all delivered with tremendous panache by the musicians of the Concert des Nations.

The accompanying multilingual booklet comes with extensive notes and is sumptuously illustrated, with several photos of the recording sessions showing performers well wrapped against the January weather.