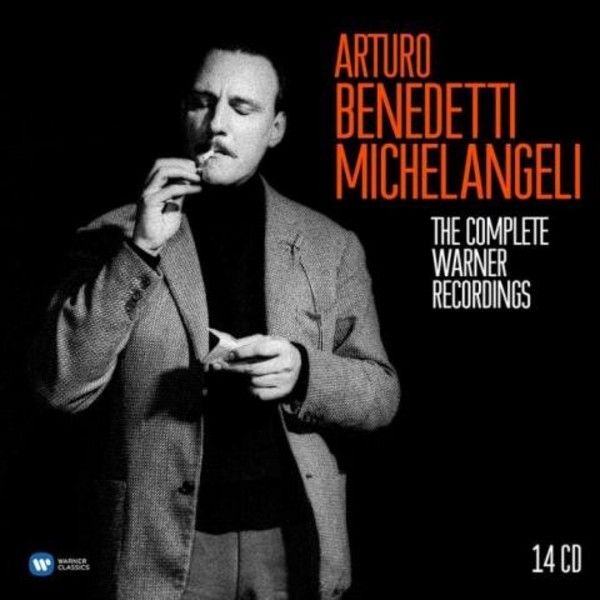 If Arturo Benedetti Michelangeli (1920-1995) remains an enigmatic figure, the elevated beauty and poetry of his playing  and its superhuman precision  are never in any doubt. This 14CD collection, which includes three previously unreleased tracks, gathers recordings made between 1939 (the year of Michelangelis momentous victory at the Geneva Piano Competition) and 1975. The repertoire, spanning the 18th, 19th and 20th centuries, encompasses works by all the composers who defined Michelangelis art.

Michelangeli was born in Brescia in Northern Italy in 1920. At the age of three he started learning the violin, but switched to the piano and received his diploma from the Milan Conservatory at the age of 13. In 1939, at the age of 19, he won the Grand Prix at the Geneva Piano Competition - the chairman of the jury, the great French pianist Alfred Cortot, is said to have described him as a new Liszt.

A very private man, Michelangeli appeared uncommunicative, even aloof on stage and he was famously a perfectionist, both with respect to his pianism and to conditions under which he performed. He rarely played more than 20 engagements per season and over his career became notorious for cancelling concerts if the circumstances were less than ideal. He even acquired the habit of touring with two of his own pianos to ensure that the instrument for each performance met his exacting standards. He summed up the particular magic of his sound when speaking to the New York Times in 1977: If you speak of my tone, then you must think not of the piano but a combination of the violin and the organ.

As Alain Cochard wrote in the French magazine Pianiste: Michelangeli engaged in an intimate, one-on-one dialogue with the music, and he could only appear on stage if the conditions were in harmony with his sense of perfection ... The fascinating sculptural quality of Michelangelis pianism can sometimes be mistaken for coldness, but appearances can be deceptive, as was the case for the man himself. The ice must be broken if we are to appreciate the true density and honesty of his interpretations.

The repertoire Michelangeli performed was eclectic  ranging over the 18th, 19th and 20th centuries  but not expansive. According to the British newspaper The Independent, he was supreme in the works of Debussy and Ravel: He had an ability to evoke a colour world in which he achieved astonishing effects, combining sustained sound with a pearly clarity. He could mould the texture like melted wax into the subtlest shapes.

Writing of his early recordings (included in this collection), Gramophone stated that: Michelangeli ranks among the grandest of all musical autocrats. And when his transcendent mastery is complemented by warmth, wit and charm, such additions are beyond price. Early in his career he possessed a Romantic as well as magisterial charisma, and listening to his performance of Bach's Italian Concerto with its wealth of colour, nuance and resilience is to be reminded that a human heart beat beneath that legendary froideur.

Further evidence of the passions beneath Michelangelis cool surface emerges from his biography. In World War II he served as a pilot in the Italian air force, before joining the Resistance. He was imprisoned by the Nazis, but escaped after eight months. The consummate pianist was also a keen racing driver, even competing in the famous Mille Miglia race that ran between Brescia and Rome. More significantly, he chose to devote much time to teaching, and among his students were Martha Argerich and Maurizio Pollini, two of todays greatest pianists.

The cover, individual discs and extensive booklet notes are illustrated with fascinating archival photographs of Arturo Benedetti Michelangeli in Arezzo, Italy, where he gave master classes during the 1950s. Used with kind permission of the association Amici della Musica di Arezzo, these images have never before been published in connection with any commercial recording of Michelangeli, and offer fascinating insights into the legendary pianists career.