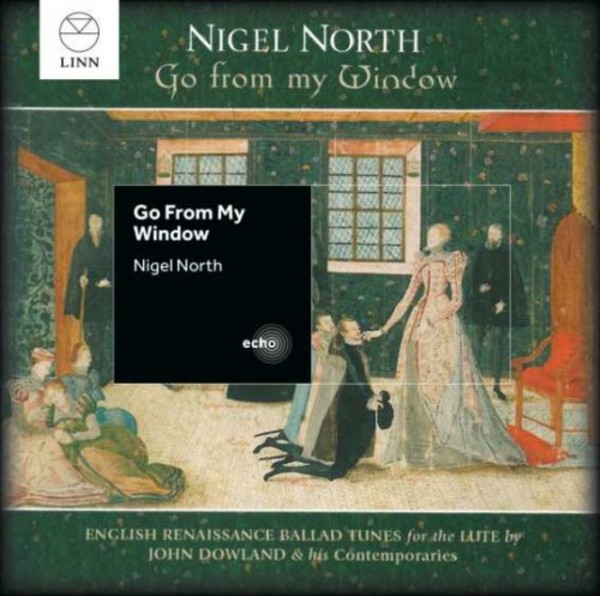 Go from my Window

John come kiss me now
Robin is to the Greenwood gone

Go from my window

The leaves be greene

John come kiss me now
Robin is to the Greenwood gone

Go from my window

The leaves be greene

Nigel North presents a beguiling selection of English Renaissance ballad tunes for the lute by John Dowland and his contemporaries.

Originally released in 2003, 'Go from my Window' has been re-issued as part of Linns ECHO series which offers a second chance to enjoy the best of the labels award-winning catalogue.

To the Elizabethans and Jacobeans of early seventeenth-century England, the lute was undoubtedly the most important instrument at all levels of society. It was the principle instrument used to accompany the voice, at court, theatre or home; amateurs played it for domestic music making; professionals like John Dowland entertained royalty around Europe with their own music composed and performed on the lute.

Familiar favourites, like Greensleeves and Go from my Window, sit alongside pieces whose popularity has since been forgotten.

North has grouped pairs of the same tune by different composers, allowing the listener to compare the different variations.

'Go from my Window' was well reviewed upon release, with Gramophone naming it a Choice recording.

Renowned as one of the world's most respected lutenists, Nigel North has developed a unique musical life embracing work as a teacher, accompanist, soloist, director and writer. With the ensemble Romanesca, North, together with Andrew Manze (violin) and John Toll (harpsichord & organ), performed and recorded 17th century chamber music, winning several international awards for their recordings.

He negotiates even the most intricate of these pieces with disarming ease and plays with a winning combination of freedom and rigour. - BBC Music Magazine

Not only is the programme sagely chosen, it is also magnificently played. North [is] among the finest living lutenists. - Gramophone

North's collectiondisplays his skill and taste as a lutenist to the full. Integral to this music is the ability to weave seamless lines around an original theme. - The Independent