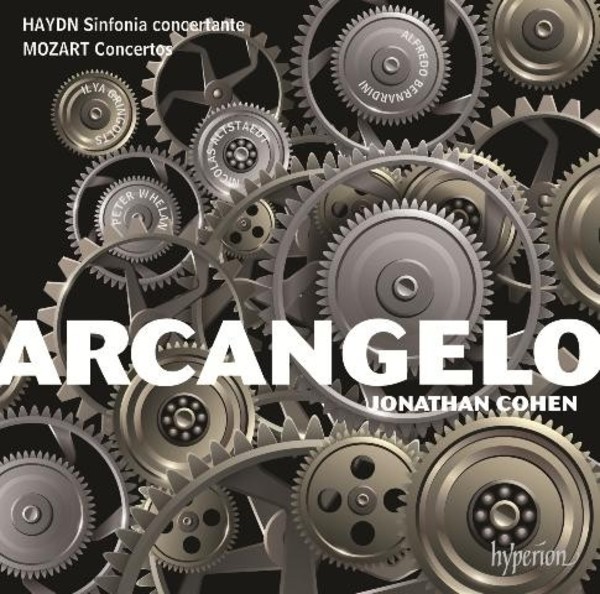 Mozarts sublime Oboe Concerto and Bassoon Concerto (he wrote only one of each) are conjured into thrilling life by Arcangelo under the direction of Jonathan Cohen.

In the Haydn Sinfonia concertante - written at the very zenith of the composers artistic popularity - four soloists combine with the orchestra in a spiral of theatrical competition.

Under their director Jonathan Cohen, the Arcangelo ensemble is turning into one of the most stylish purveyors of Baroque and Classical repertoire to emerge in recent years. Their discography already ranges from Monteverdi and Bach to the early Classical period, from recital discs to concertos and even the Mass in B minor. On this latest disc from Hyperion they turn their attention to wind concertos by Haydn and Mozart, and it's a sumptuous feast, brim-full of character and joie de vive. It helps enormously that the soloists are top-drawer, and the orchestra itself plays throughout with evident relish.

With the exception of the late Clarinet Concerto, none of Mozart's wind concertos approach the exalted heights of his greatest piano concertos, yet the composer's familiarity with his original soloists and their capabilities ensures that they are always tremendously engaging. Earliest of the works on this disc is the Bassoon Concerto of June 1774: the first movement is full of registral leaps that exploit the bassoon's comic potential as well as the player's dexterity. The slow movement is a dreamy aria with some extraordinary harmonic shifts, while the last movement is a Rondo in minuet tempo whose courtly decorum is undercut by witty figuration from the bassoon and a minor key central section. Bassoonist Peter Whelan brings tasteful decoration to the solo part. His is a richly satisfying tone, pungent in the lower register, but producing an extraordinary cantabile in the haunting Andante.

Composed in April 1777 for the Bergamo-born Giuseppe Ferlendis, the Oboe Concerto was one of Mozart's most successful concertos in his lifetime, and it's not hard to hear why. Extrovert, witty, luminous and deftly scored, with a breezy opening Allegro, another aria-like slow movement with moments of melting chromaticism, and an irrepressibly high-spirited Rondo finale, it counts among his happiest creations. Alfredo Bernardini plays the solo part as to the manner born. Alert, nimble and dazzlingly stylish, he brings out the quasi-vocal quality of much of the writing. And he's given superb support by the musicians of Arcangelo; listen to the way in which the various strands of the opening tutti are brought out by the strings at 00:25. This is Mozart playing of the highest calibre.

The disc opens with Haydn, whose concertos (with the exception of the Trumpet Concerto) have never counted among his most popular works. In the Sinfonia concertante for violin, oboe, cello and bassoon, however, we have a superb example of an excursion into a fashionable contemporary sub-genre. Symphonies concertantes were opportunities for groups of soloists to take the spotlight as a team, in music that was above all entertaining. Haydn's sole excursion into the genre was composed in March 1792 during his first visit to London, primarily as a vehicle for the violinist and impresario Johann Peter Salomon, and to compete with works by Pleyel in a rival concert series. Haydn rose magnificently to the challenge, and the work is scored for a large orchestra including trumpets and drums in a manner reminiscent of his 'London' Symphonies; little wonder that it was an instant success. With violinist Ilya Gringolts and cellist Nicolas Altstaedt joining forces with Bernardini and Whelan, this performance enjoys luxury casting, and the musicians fit together like a dream. The phrases of the pastoral Andante are teased out gloriously as the soloists pair off, while in the opening Allegro the cello busies away with the most challenging figuration even as the other instruments enjoy their moments in the sun. The finale is the most fun, however, with mock recitatives and witty interplay between the soloists. They sound as though they're having the time of their lives  and the listener does, too!

Outstanding in every way.