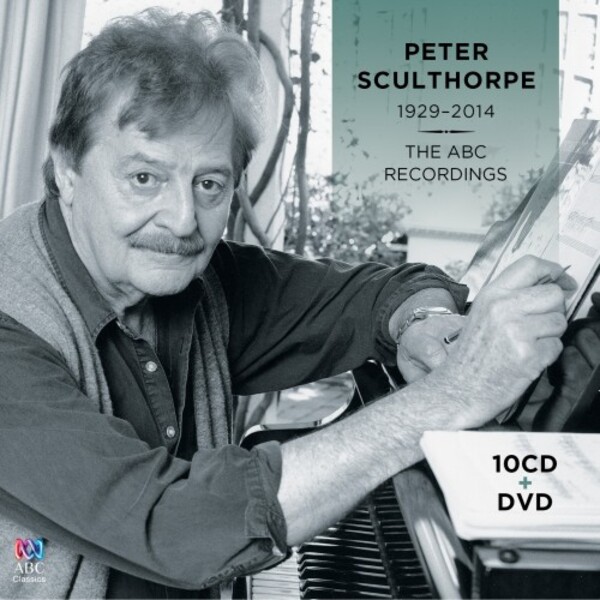 The passing of Peter Sculthorpe back in August 2014 was not only a loss for Australia, of which country he had become a kind of musical icon, but for the world (IRR obituary November 2014). Peter Sculthorpe symbolised and was the voice of Australian classical music in the same way that Tom Roberts and Sidney Nolan represent Australian art and Patrick White (with whom Peter wrote his opera Eliza Fraser) and Peter Carey Australian literature.

Peter Sculthorpe had a life long relationship with his publisher Faber Music in London, and after Benjamin Britten, was the second composer ever signed to Faber Music back in 1965.

Peter Sculthorpe had an enjoyable and fruitful relationship with the Australian Broadcasting Corporation and ABC Classics. Yorkshire born conductor John Hopkins first championed works by Peter Sculthorpe in Australia in the mid-1960s, and here conducts the first recording of Sun Music I - IV (featured on CD 1 of the boxed set), originally licensed for release on LP to EMI in 1977. This was the first commercial recording to establish Sculthorpe internationally.

This 10CD deluxe boxed set, brings together Sculthorpes ABC recordings for the first time to form a remarkable tribute to one of the worlds great composers. The mix of conductors who have embraced the music of Sculthorpe on this boxed set says much in itself - Dutch conductors David Porcelijn and Edo de Waart, British conductor James Judd, Estonian Arvo Volmer and director of the Australian Chamber Orchestra, Richard Tognetti.

Sculthorpe created a musical voice that for the first time spoke directly of the land, the people and the spirit of Australia. His music opened up new possibilities for Australian composers, and brought a distinctive Australian voice to concert halls around the world.

This collection celebrates four decades of ABC recordings of Sculthorpes orchestral music, including the acclaimed Sun Music, Earth Cry, Port Essington, Quamby and Requiem. The set contains extensive annotations from Dr Graeme Skinner, one of the Australias pre-eminent academics and writers on the history of Australian music and musical composition, providing a thorough musical insight to this revered composer.

Also included in this set is the first-ever release of the DVD 'Peter Sculthorpe  The String Quartets', in which the composer surveys his life and career as seen through his 18 string quartets, the first of which was written in the 1940s, with No.18 completed in 2010. Performances are by the acclaimed Goldner String Quartet, long time champions of Peters music.