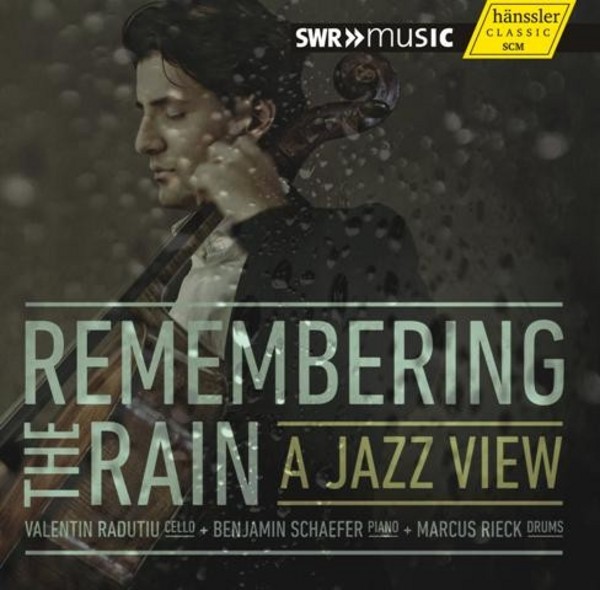 Remembering the Rain  A Jazz View

Interplay
Laurie
Remembering the rain
Turn out the stars

Cry me a river

Smoke gets in your eyes

Interplay
Laurie
Remembering the rain
Turn out the stars

Cry me a river

Smoke gets in your eyes

Only a few, famous jazz bassists have ever gone beyond the limitations of their instruments and sought new opportunities on the cello. Now, the cellist Valentin Radutiu has turned the tables and shows how well the cello suits jazz  at times taking the role of the traditional string bass, at others, a resonant tenor guitar while at others, he gives its voice wings.

The tendency to experiment with musical material is deep within this cellist - he is constantly exploring new sounds to expand the expressive range of his instrument. The repertoire of this extraordinary album comes mainly from the 'Great American Songbook', supplementing that glorious heritage with standards by Cool Jazz purveyor John Lewis and master improviser Bill Evans, both of whom had their own anchors in classical music as well.

Aiding and abetting this project, this "exceptional cellist" (as the Süddeutsche Zeitung described Valentin Radutiu), are two seasoned jazzmen, Benjamin Schaefer and Markus Rieck, who in their own right are among the most renowned cross-over artists in their field, and bring just the right mixture of risk and reserve. This team exhibits a lot of mutual respect and along with adding dash of wit and a light touch, the fusion works and the centre holds!

'Remembering the Rain' is not about creating a revolution or tearing down imaginary walls. Rather, it moves at a deliberate pace, allows the cello to step out of its classical provenance and stretch its 'legs'. Because this music is not about confrontation - Remembering the Rain' is an exciting opportunity for Valentin Radutius to take his immense skills in a new and different direction, and playfully engage with the music he loves and broaden his audiences emotional and aesthetic perspective in the process.