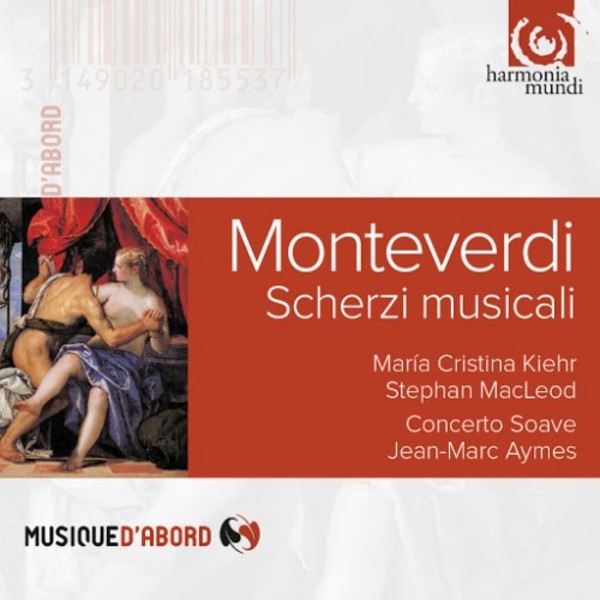 In addition to his books of madrigals, Monteverdi also practised throughout his life less ambitious vocal forms which he designated canzonette, arie or scherzi. Here is a broad selection of these, from the canzonette published in 1584  when he was only 17  to the two books of 'Scherzi musicali'.

I shall be surprised if this one doesnt feature in my Christmas list. - Hugh Canning, Classical CD of the Week, The Sunday Times, 24 July 2005

"Maria Cristina Kiehr's cool, androgynous tones are most impressive in the simplicity of Si dolce e'l tormento and the Lettera Amorosa. The instrumental solos are superb." - Anna Picard, The Independent on Sunday, 3 July 2005

The dulcet tones of Maria Cristina Kiehr combine beautifully with the potent bass-baritone of Stephan MacLeod in these charmingly refined works, under the expert baton of Jean-Marc Aymes - Anthony Holden, The Observer, 10 July 2005

Kiehr makes wonderfully expressive use of shading to bleach her voice of all colour at one moment and make it seductively honeyed the next, and is supported with sparky instrumental playing by the members of Concerto Soave. - Andrew Clements, The Guardian, 5 August 2005