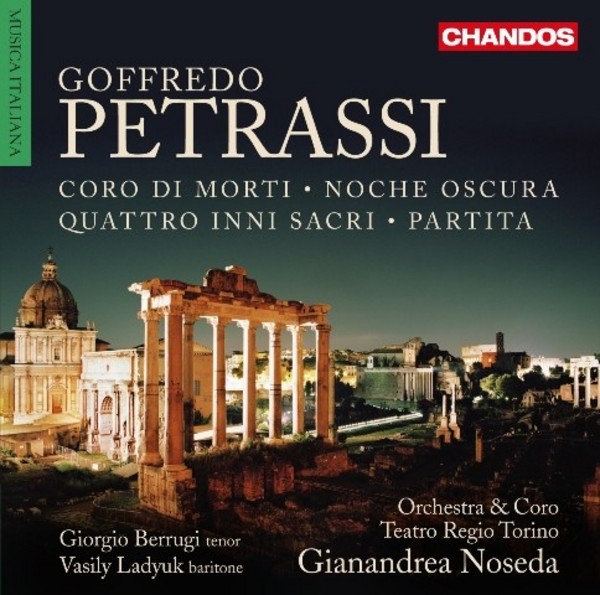 This new Goffredo Petrassi recording with Gianandrea Noseda and his Italian forces is part of our on-going Italian music series. Last years release of Salmo IX° and the Magnificat (CHAN10750) was widely praised, Gramophone stating: The performances by the forces of Teatro Regio, Turin, are committed and persuasive... Excellent sound makes this a thoroughly recommendable release and I hope Chandos and Noseda go on to give us more choral Petrassi, such as Coro di morti  which indeed features on this album.

The Orchestra Teatro Regio Torino is joined in Quattro inni sacri by the internationally famous tenor Giorgio Berrugi and by the baritone Vasily Ladyuk, who is a regular guest soloist at the Bolshoi and Novaya Opera Theatres.

Like the roughly contemporaneous Noche oscura and Quattro inni sacri, composed round 1950, the superb Coro di morti is one of the most extraordinary statements of the art of Petrassi at the beginning of the 1940s. It remains one of the most admired and frequently performed of his compositions. According to Cardinal Andrea Lanza, the work, composed and premiered during the Second World War, reveals a marked opposition in discourse... between the solitude of man and the destruction surrounding him, all of which is clearly relayed in the harrowing contrast between relaxed choral lines on the one hand and solid conglomeration of instruments on the other.

The Partita is one of the earliest works Petrassi composed, yet one of his most famous. It achieves explosive brilliance and shows the composers precocious and accomplished control of orchestral technique.