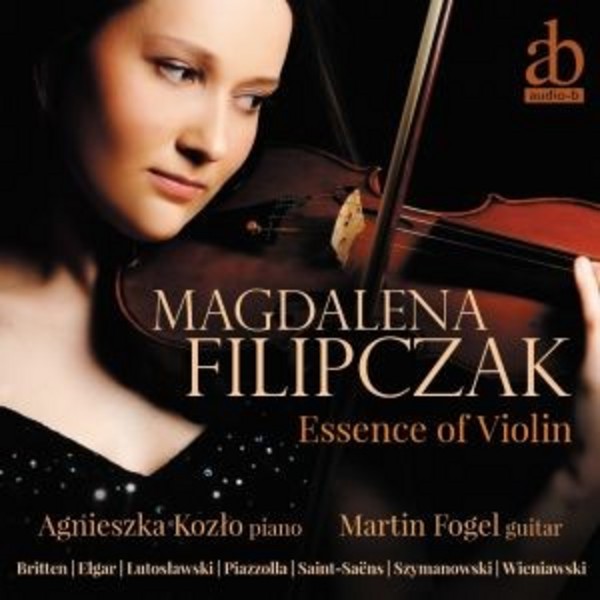 Magdalena Filipczak is regarded by critics and eminent musicians as one of the most outstanding young Polish violinists of her generation. Now resident in London, she makes her debut solo recording on the Audio-B label with a compelling recital focusing mostly on English and Polish composers.

'Essence of Violin' features Magdalena Filipczak with her regular duo partners, Polish pianist Agnieszka Kozlo and Swedish guitarist Martin Fogel, performing a beautifully balanced programme of music by Britten, Elgar, Lutoslawski, Piazzolla, Saint-Saens (arranged by Ysaye), Szymanowski and Wieniawski. Her playing is superb throughout and the recording will no doubt win her many new admirers.

In recent seasons, Filipczak has performed as a soloist and chamber musician at top concert venues in the UK, Europe, South America, Canada and the USA, and she has played at music festivals such as the BBC Proms, the City of London Festival, Edinburgh Festival, the Swaledale and Ryedale Festivals in the north of England, America's Norfolk Festival, the Paxos Chamber Music Festival in Greece, and Estonia'fs Tallinn Chamber Music Festival.

She has featured in a recording project at the Banff Centre in Canada with Gruppo Montebello, Marianne Pousseur and Nan Hughes, under the direction of Henk Guittart, to celebrate the 100th anniversary of Schoenberg's Pierrot Lunaire and the 1913 'Skandalkonzert' in Vienna. With the Royal Northern Sinfonia she recorded violin solos for Tim Garland's jazz-influenced 'Songs to the North Sky', released on Edition Records in 2014.

"Magdalena Filipczak is a great musician and a great violinist. She possesses superb instrumental command. The rare combination of complete mastery of the instrument, thorough understanding of music, together with deep sensitivity and wonderful concentration enables her to spellbind and touch audiences" - Henk Guittart, International Tutor in Strings Performance, Royal Northern College of Music.