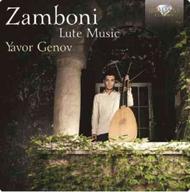 Italian composer Giovanni Zamboni is somewhat of a mystery to the modern listener. Very little is known of his life: he was born in Rome in the latter part of the 17th century, became a virtuoso on the theorbo, lute, harpsichord, guitar, mandore and mandolin, and had a side‐career as a jeweller.

Several of his compositions have been lost over the years, but among his published works is a collection of four‐part madrigals and a collection of solo lute music, the Sonate dintavolatura di leuto. Published in Lucca in 1718, the Sonate dintavolatura di leuto is among the latest sources of solo lute music, written in Italian tablatures. The works contained within show the blurring of lines between the two accepted styles of sonata - those for the church (da chiesa) and those for domestic use (da camera).

Many of Zambonis lute sonatas are written in four‐part sets, containing mainly dance movements. This makes No.11 distinctly atypical, as its Currante, Sarabanda and Minuet  which signal a 'da camera' purpose  contrast with its opening movement, a Grave, much more characteristic of the seriousness of the 'da chiesa' style.

Bulgarian‐born Yavor Ganov studied classical guitar at the University of Sofia, where he developed an interest in Medieval, Renaissance and Baroque music. He has given recitals throughout Bulgaria as well as in The Netherlands and Sweden, and has performed with the European Union Baroque Orchestra. He has previously recorded the works of Giovanni Kapsberger for Brilliant Classics.