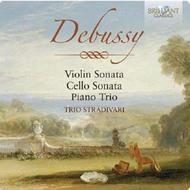 These original works and arrangements for violin, cello and piano by Claude Debussy span the composers protean career, from the early Piano Trio of 1880 to the Cello Sonata of 1915 and the Violin Sonata, completed in 1917 as part of an abortive six sonata project which ended halfway when he died the following year.

Especially since the performances are given with the experience harvested by three musicians who are better known as early‐music specialists, soaked in the philosophy of historically informed performance practice, they offer an intriguing survey, unique on record, of the composers development.

As Harold Schonberg, music critic of The New York Times, wrote, it would be amusing to invite classical music 'experts' to listen to the Piano Trio, with its expressive reminiscences of Schumann, and then guess who the composer is: few of them would say Debussy.

And yet the two late sonatas masterfully shuffle the cards of Impressionism, pre‐Classical sonata structures and Stravinskian distance and eccentricity: the Cello Sonata originally bore a heavily symbolic title (Pierrot faché avec la lune) relating to the paintings of Watteau with their elusive mixture of melancholy and irony. It uses the timbre of early music and citations from the great French harpsichordists to conjure up Pierrots moody, troubled world, which was that of the slyly smiling masks of the commedia dellarte.

As a bonus is a series of short and much loved pieces in arrangements: Reverie, Arabesque, Minstrels, La fille aux cheveux de lin, and two early original miniatures for cello and piano. The arrangements are the work of several hands, among them Debussy himself, of better‐known and justifiably popular works that revel in the sophisticated evocation of mood through lyrical melody and evanescent textures.

The musicians on this CD, Federico Guglielmo, Luigi Puxeddu and Jolanda Violante, have won their spurs mainly in Early Music, so their view on these works is fresh and open, with infectious esprit and zest.